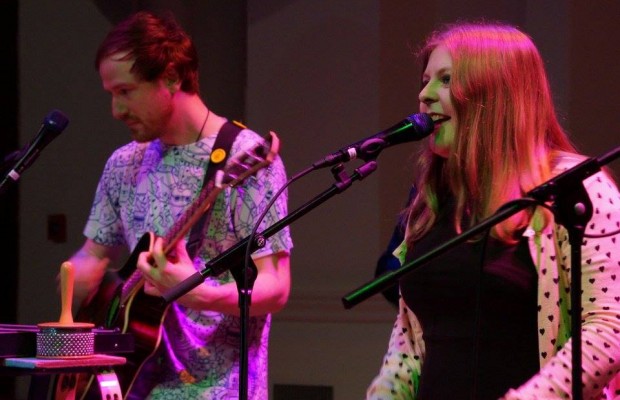 Liz Hunt organises Wales Goes Pop! as well as co-running events management services in Cardiff (Fizzi Events) and being in her own band, The School. Needless to say, I’m very grateful that Liz not only let me come along to Wales Goes Pop! this year, but also that she took the time out, after a well-deserved rest (and a lot of pizza) to talk to me about the history of Wales Goes Pop!, this year’s event and even the blueprints for next year…

Hey Liz, just to get the obvious & boring questions out of the way… when and how did Wales Goes Pop! start?

I started the festival 4 years ago after being bored the Easter before. No-one seemed to be putting on anything interesting, possibly because all the students aren’t around. I’ve always liked organising all-dayers and going to small festivals so I decided to set one up for Cardiff. I started with some bands that my band have played with before to headline – The Primitives and Allo Darlin’ – then other acts fell into place like Joanna Gruesome, Let’s Wrestle, Josie Long, The Wave Pictures,Evans The Death and Laura J Martin. It worked! People came!

Has the festival grown in popularity over the years?

Yes this year was the busiest! It’s great seeing the same faces coming back each year, and lots of new people too. Children going to their first festival, parents being able to bring their families and people travelling from Spain, France, Germany… It certainly feels like word has been spreading and we’ve picked up a bit more press this year too so I think that’s all helped, along with the line up! This year it was really noticeable how early people were arriving to see all the acts, even ones they might not have heard of.

Do you think there’s potential for the festival to get even bigger or are you happy with the size it is?

It can be slightly bigger but not too much – I’d be happy if we stayed with this year’s numbers, honestly. We couldn’t get many more in while keeping it a comfortable safe space for everyone to spend 3 days, especially with it being all ages.

Something I noticed, and something I’ve talked about with some of the artists, was the number of women on the line-up. There’s a lot of talk right now about women in music, particularly the lack of female representation in festival line-ups. It’s certainly something I feel passionate about, was it a conscious decision to include so many women or did it just happen?

It was never a conscious decision, I’ve been putting on shows here for about 10 years and looking back there’s always been a strong female presence, but I didn’t necessarily notice it at the time. It wasn’t intentional, but last year when people started drawing attention to the lack of females on larger festival bills like Reading, we counted our line-up and 29 out of 30 acts had female musicians, which made me really proud. I haven’t counted this year, I don’t want it to be a statistic or viewed as tokenism, because it shouldn’t be like that. I just book who I want to book. The argument that there just aren’t any good female musicians out there to book is complete nonsense, although we definitely need more in general. I’ve had so much positive feedback from musicians on the bill, parents saying it’s a good example to their children seeing so many females on stage, and it’s somehow reflective in the audience we attract too.

Something else I noticed, slightly on the negative side, was the age gap in the audience:

It’s an all-ages festival, which is awesome and it was great to see kids running around and having a good time whilst their parents get to watch the bands. But there didn’t seem to be many teenagers or young adults in the audience, which surprised me because a lot of the bands on the line-up are young and up & coming.

Did you notice this too?

Yes, I’d love to get more people along from that age group, we always push that it’s all-ages but I need to do a lot more work reaching out to them, including 14-17 year olds and uni students who come back home to Cardiff during the Easter holidays.

Back to the fun stuff, I know it’s mean to pick favourites, but if you HAD to choose, which bands and artists have been some of your favourites to have play over the years?

Very mean! I persuaded the many-legged Cardiff band Little My to reform last year, Helen Lovewith the stage invasion and glitter guns, Thomas Truax making full use of the venue, lots of people discovering Cowtown, PINS had the audience in the palm of their hands, and basically everyone who played this year.

Is it fun performing at your own festival with your own band, The School? I imagine it’s pretty tiring organising an entire festival and THEN playing it too!

It’s so much fun! It’d be weird if we didn’t play, we always open the Saturday (mainly so we get a sound check and to try getting a few people in early for the next acts) – it’s too early in the day for me to get stressed then! This year we wanted to do something different so we played out first album from 2010 which has just been reissued, and hopefully next year we’ll have a few new songs to try out.

How did you feel the festival went this year?

Without insulting anyone involved in the other years, it was my favourite! Everyone was lovely too. I’ve gradually built up the best little team of staff and helpers, without them it would all fall apart.

Will the festival be returning next year?

Of course! Next Easter weekend, 14th-16th April! It looks like it’ll coincide with Record Store Day again so hopefully we’ll get something special relating to that! (Same as in 2014 when The Wedding Present played while they released a Welsh language EP for RSD).

Who would you love to have on a Wales Goes Pop! line-up? Both realistically and the more unrealistic ‘dream’ acts.

Lots of the touring bands don’t come over during Easter, they wait until May onwards for all the festivals so we often miss out – but I’d love Jens Lekman, Of Montreal, The New Pornographers,Someone Still Loves You Boris Yeltsin, Summer Twins. I’ve got a huge wishlist to keep me going a few years yet!