THE SCHOOL is a group with numerous members that comes out of Cardiff and is fronted by Liz (vocals, previously of THE LOVES).

Knowing how to assimilate the influence of girl groups of the sixties (THE RONETTES, THE SHANGRI-LA's) with the luminosity of current folk-pop groups (BELLE & SEBASTIAN, CAMERA OBSCURA), since they signed with Elefant in 2007, they have delivered a handful of singles and several albums that have made us tremble with tenderness and excitement. 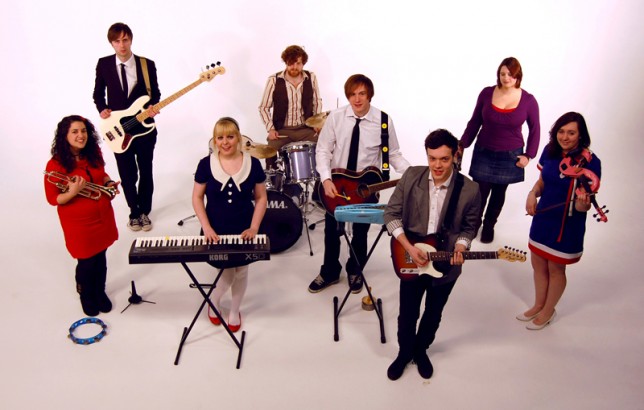 Eight young people fronted by charming Liz from the also very charming bubblegum psychedelic popsters THE LOVES. She is the main singer and keyboard player.

Combining such influences as indie-pop and the brightest shimmering 60's productions, THE SCHOOL's style is a Brit version of sunshine pop with moments of light and shadow, the kind of infectious, hyper-melodic pop you can simultaneously cry and dance to. Sophisticated, happy songs, with a little melancholy thrown in them, inspired by THE BEACH BOYS (and the fantastic AMERICAN SPRING, produced by Brian Wilson), THE BEATLES, Phil Spector and girl bands from the 60's. Not forgetting, of course, other current bands with whom they share references and tastes, bands that also wrap their sweet melodies in wonderful keyboard and string arrangements, bands like BELLE & SEBASTIAN, SATURDAY LOOKS GOOD TO ME, CAMERA OBSCURA, Jim Noir, LUCKY SOUL, THE BRUNETTES or LITTLE MY.

They only had done four live shows when they signed with Elefant Records in the summer of 2007. Since then, their live concert experience has grown, of course: in october they toured all over the UK along with THE LOVES. But before this extensive UK tour, in september the band entered the recording studio with engineer/producer Ian Catt (SAINT ETIENNE, TREMBLING BLUE STARS, NOSOTRÄSH) in order to record the two songs that are included on their debut 7", "All I wanna do". A limited edition vinyl single.

In March THE SCHOOL release their first single. “All I Wanna Do” reminds us of CAMERA OBSCURA and embraces passion with the legacy of Phil Spector, with a chorus filled with moving romanticism and a song that grows with the intensity as each compass is played, embellishing the melancholy until it stops and it leaves you shivering. “Valentine” has something else in store for the listener, as it is on the other side of the single, with a tight chorus (a must to dance to!), an agile rhythm and Diana Ross thinking that THE SUPREMES never ended. An amazing B side! Pitchfork, Plan B and Under the Radar have all spoken highly of them, comparing them to classic bands such as THE BEATLES, ELO and THE BEACH BOYS and more modern groups like SATURDAY LOOKS GOOD TO ME, BELLE & SEBASTIAN and LUCKY SOUL, among others.

Only some weeks after letting you know about this amazing new band from Cardiff and their wonderful debut single, “All I wanna do”, now it’s time to confirm the commotion and clamour their songs are creating amongst the music press and 50s girl-group fans. Rough Trade compares them to Kirsty McColl and CAMERA OBSCURA, Hipersonica to BELLE & SEBASTIAN and THE BEACH BOYS, New York newspaper The Village Voice turns them into a magical daydream of THE RONETTES, weblog Parallax View makes them single of the week and Pitchfork considers them relatives to Phil Spector‘s wall of sound. And let’s not forget about the two radio sessions the band has recorded for British BBC: the first one, last February, for Bethan Elfyn‘s show on Radio 1, and their second appearance live on the BBC by mid-March, this time for Marc Riley. After such enthusiastic reactions, we cannot do other than euphorically annouce that their second single, “Let it slip”, has been released. Born from the same sessions that resulted in “All I wanna do”, and with Ian Catt (SAINT ETIENNE, TREMBLING BLUE STARS, NOSOTRÄSH, THE FIELD MICE, SHAMPOO, THE BOO RADLEYS, Kahimi Karie) on production duties, this new single holds four delightful songs: “Let it slip” (which gives the single its name), “I don’t believe in love”, “I want you back” y “Shoulder”. But the best thing about this release is the way it reaffirms our already strong belief in the single format’s grandeur, especially when a band such as THE SCHOOL is able to record four songs that could very well be earth-shaking hits.

After the success of "All I Want to Do" and "Let it Slip", an unstoppable UK tour begins. They give five successful concerts in Italy, and also travel to Spain and Sweden. They appear on the BBC’s top programmes and on numerous lists, hailed as one of the most promising bands of the year.

Rough Trade includes “All I Wanna Do” in its annual best of the year selection “Counter Culture ‘08”, released on the 26th of January. It describes the Welsh group as “one of the reinventors of indie-pop, along with bands like THE PAINS OF BEING PURE AT HEART, CRYSTAL STILTS and THE VIVIAN GIRLS”.

The impact that THE SCHOOL’s songs are making across the globe is amazing, which is demonstrated by the fact that “Valentine” (one of the two songs included on last year’s debut single “All I Wanna Do”), has been chosen by LG for its television and internet advertising campaign. Curiously, the object of the campaign is an elegant new refrigerator called “God”.

In March, THE SCHOOL is on tour with THE BOY LEAST LIKELY TO (one of the UK’s most important pop bands).

THE SCHOOL only has two singles out and yet the band has given nearly a hundred concerts. This is both wonderful and amazing.

The band plays at the third edition of Indietracks Festival in England and Spanish festivals such as Lemon Pop and Murcia Sound.

The songs "I Don´t Believe in Love" and "Kiss you in the Snow" are included in the Spanish film "Yo, también” (Me, too), and are also found on the film’s soundtrack.

They appear a second time in one of the compilations ("Indiepop 09") by prestigious record shop "Rough Trade". This time they do so with "And Suddenly", an incredible version of one the LEFT BANKE’s latest compositions, which was originally released on the Split single with GEORGE WASHINGTON BROWN by Slumberland Records.

In December, THE SCHOOL surprises us with a new carol called "Let Me be the Fairy on Your Christmas Tree Tonight".

In May THE SCHOOL release their first album, “Loveless Unbeliever” is that album that fans of bands like CAMERA OBSCURA, THE PIPETTES and BELLE & SEBASTIAN have waited so impatiently for. An album with the same sense of melody as THE RONETTES (those references in “Is He Really Coming Home?” and “The One Who Left Me”), the ability to acquire the youthful irreverence that the marvelous Grease soundtrack boasted, the imaginative arrangements of greats like Phil Spector or Jack Nitzsche, all updated with an impressive vision. The thing is, is that Liz and company have made one of those albums where all of the songs are definite hits, where listening is agile and so ephemeral. With the
cherry on top that Ian Catt (SAINT ETIENNE, TREMBLING BLUE STARS, THE FIELD MICE, SHAMPOO, THE BOO RADLEYS, Kahimi Karie) has always given them, they were able to assimilate the whole pop tradition and reproduce it with their own personality, mastery and inspiration.

On March “Hoping and Praying” arrives in digital format. “Hoping and Praying” one of the songs that best reflects the album’s spirit: youthful and excited, vital and colorful, melancholy and tremendously fun. Next, “Can You Feel It?” is a previously unreleased track from the album sessions, about which we are still asking ourselves today why it didn’t make it onto the album, with its accelerated pop and glorious chorus. One of the greatest gems of this EP is “And Suddenly”, and incredible version of one of the last compositions by THE LEFT BANKE, originally released as a Split-single with GEORGE WASHINGTON BROWN on Slumberland Records, and which at times brings our protagonists close to the gorgeous elegance of Bacharach. And then there is the closer, “Let Me Be The Fairy on Your Christmas Tree Tonight”, taken from the compilation “A Very Cherry Christmas Volume 5” from the British label Cherryade Records, with its rock ´n roll piano along the best lines of THE SHIRELLES and THE SHANGRILA’S, as if we would expect anything less.

The culmination of all of this is the precious video for the title track, directed once again by Tom Readdy (who also did their two previous videos), in which we can see the band playing, nothing more and nothing less, in the altar of a church (!!), while at their backs all sort of colorful “miracles” are taking place, which John Lennon would definitely approve of. Both the album cover and the celestial animations are by Lucy Dawkins.

On July digital single for “I love everything”. The song is short, with a simple structure but an incredibly beautiful melody, those marvellous choruses and that bridge that opens the way through the song like rays of sunshine through black clouds after a storm. And for the B-side we have two big surprises. First, the “Hungry heart” cover that Liz’s group made for the Bruce Springsteen tribute called “Play Some Pool, Skip Some School, Act Real Cool”, (released by the label Where It's At Is Where You Are and available online in our store) where they share the credit list with other names like THE WAVE PICTURES, ALLO DARLIN', Darren Hayman, Harvey Willians, BUTCHER BOY and even Doug Yule (THE VELVET UNDERGROUND) collaborating with Jeff Mellin. The gang from Cardiff takes one of “The Boss’” greatest hits to their territory and turns it, even more, into an irresistible hit. Last (but not least), an amazing song that has special significance for us, because the version of “All I Wanna Do” that closes this single is the one they included on the demo they sent to Elefant Records that made us fall immediately at their feet. On that song you could already see so many of the virtues that we enjoy now that they’ve come to fruition, like those precious arrangements, addictive choruses, dreamy melodies and their colorful instrumentation.

The video for “I love Everything” is directed by Jonas Whale. It is an example of the delicate and appealing poetry of the day-to-day, with a fantastic final homage to “Le ballon rouge”, 1956 the short-film directed by Albert Lamorisse – everything is a prayer to fantasy and the excitement of our youth.

THE SCHOOL: Pre-release of the single “Never Thought I'd See The Day” from their upcoming album

THE SCHOOL: Release their second album "Reading Too Much Into Things Like Everything