Mr. Suave's Mod Mod World [Gb]: "Reading Too Much Into Things Like Everything" review

Mr. Suave's Reviews You Can Use -- The School's Latest Is a Winner 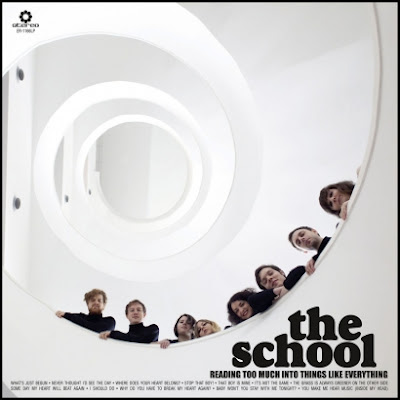 The School is one of the leaders among indie bands that are keeping sixties pop and soul alive in contemporary music. The Cardiff band's sound hasn't evolved, because it didn't need to, as much as it has been sharpened. Their first single was 2008's All I Wanna Do a dreamy, shimmery bit of indie pop. After that it was the EPLet It Slip which was a strong step forward and helped put the band on the map. They followed that two years later with their debut full lenth album, Loveless Uneliever. The music in those early releases was heavily sixties influenced, and rather twee with the girlisly lilting vocals of lead singer and keyboardist Liz commanding full attention. The songs seemed to circle her vocals which put her at the heart of the band. And not just musically, the album cover for Unbeliever was a rose tinged closeup headshot of the blonde chantreusse. Now here we are in 2012 on the brink of another new release from The School. The band --and it's a big band, eight people strong, half male and half female-- is set to release on Monday their sophmore album, Reading Too Mucn Into Things Like Everything on Elefant Records. The album picks up in many ways where Loveless Unbeliever left off, but like I said with a sharpened focus. That focus has a more soulful, girl group feel to it than even Unbeliever did. Ths songs themselves are sharper. Where Unbeliever had a more innocent carefree feel and a lovelly simpleness to the songs, Reading Too Much shows maturity in both the arranging and the wrting.

The opening track Never Though I'd See The Day is a jaunty bit of pop that opens the door onto an album that brought to mind for me all of my favorite things. At times you can almost think they're playing Burt Bacharach arrangements, especially on Where Does Your Heart Belong with it's mellow trumpet solo and soft strings. Elsewhere you are reminded of other girl vocal focused groups likeShe & Him, such as on Stop The Boy, with it's soft, melodious vocals. The album is packed with strong songs like the lush, richly arranged It's Not the Same. Someday My Heart Will Beat Again has lavish girl-group type vocas, a very sixties styled approach and is the sort of song that could have been on the Quadrophenia movie soundtrack, like The Cascades Rhythm of the Rain. The Grass is Always Greener on the Other Side with its jaunty, almost doowop sound shows off the happy sixties influence that The School incorporates into all of their music so pitch perfectly. Throughout there is an obvious deep seated love of the sixties girl group sound, The Chiffons, The Shirelles, The Shangri-Las, which is no different than The School's previous releases. This is enhanced by the swirling and dreamlike keyboards, the trumpet flourishes, and the overal musicianship of the group. In Reading Too Mucn Into Things Like Everything you have a dozen of the best sixties songs written and produce in teh 21st century. The only thing missing is a male vocal. I thought one of the strongest songs on Loveless Unbeliever was the closing track, I Don't Believe In Love.Still, overall this an album that fits nicely with other groups keeping the revival sound around such as The Like's Release Me, Lucky Soul's The Great Unwanted and The Red Button's As Far As Yesterday Goes. You won't be disappointed in this one, in fact you're more likelly to overplay it -- but you won't mind.