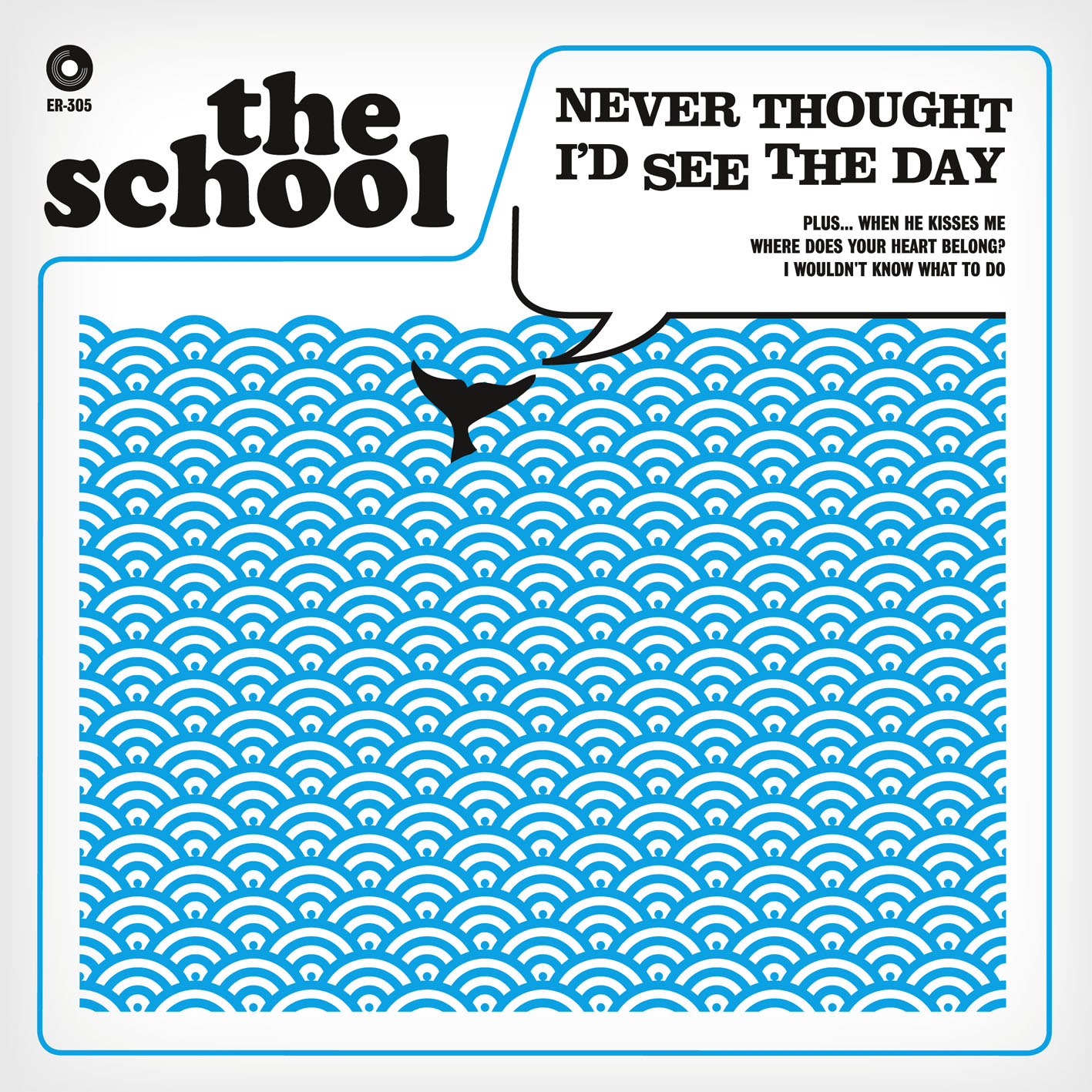 I’ve been hearing rumblings about new music from my old friends The School for almost a year, and now, finally, the time has come. A single, along with a whale of a cover designed by drummer and Bubblewrap Collective-ist Rich Chitty, is due out from Elefant Records on 26 March. Over the course of four brand new tracks, we find the band, still champions of the piano-driven 60s pop that dominated their 2010 debut LP,Loveless Unbeliever, exploring new sounds which build brilliantly on the aural textures established in their earlier releases.

These added dimensions are most prevalent on the A-side, “Never Thought I’d See The Day”, in which a digital organ takes up where the piano left off, a move that will please fans of Hollows and The Like. The organ gives the song a more full-bodied feel, while danceable rhythms and Liz Hunt’s usual breathy vocals keep the track firmly planted in the indie pop world without going the full garage. “When He Kisses Me” and “Where Does Your Heart Belong” are more reminiscent of theLoveless Unbeliever days, though a recorder makes an appearance on the latter where, likewise, the trumpet is used to great effect (think Tigermilk-era Belle & Sebastian), while “I Wouldn’t Know What To Do” is a stripped down ballad that relies heavily on acoustic guitar and glockenspiel. Overall, “Never Thought I’d See The Day” sees The School moving ever-so-slightly in a new, you might even say more mature and cohesive, direction, which is a promising development for band and fans alike.

Speaking of which, you all know The Primitives are a thing again (and have been for a couple of years), right? Which is a good thing for me, because I’ve been spending a lot of quality time with their first two LPs lately and my list of indiepop bands who were dead before I knew them has grown so long, it’s a great feeling to finally be able to strike a name off that list. In April, the Primitives (now part of the Elefant roster) will release Echoes and Rhymes. The album, featuring 14 covers of somewhat obscure female-fronted acts from the 60s will be the band’s first LP in over 20 years. If you’re a longtime fan, then no doubt you’re already feeling a twinge of excitement. But if you’re new to the Primitives, pick up their RCA LPs if you can find them (they are, I believe, out of print now, but I see affordable used copies of Lovely and Pure pop up now and then in the better indie record stores).

Either way, get listening because (and this is the best part) The Primitives and The School, will be playing a handful of UK dates together this spring. And I think we all know how great those are going to be.

17 May: Brighton, The Haunt

22 May: Manchester, The Ruby Lounge

24 May: Doncaster, The Leopard

Further details and ticket links can be found on the Elefant site.