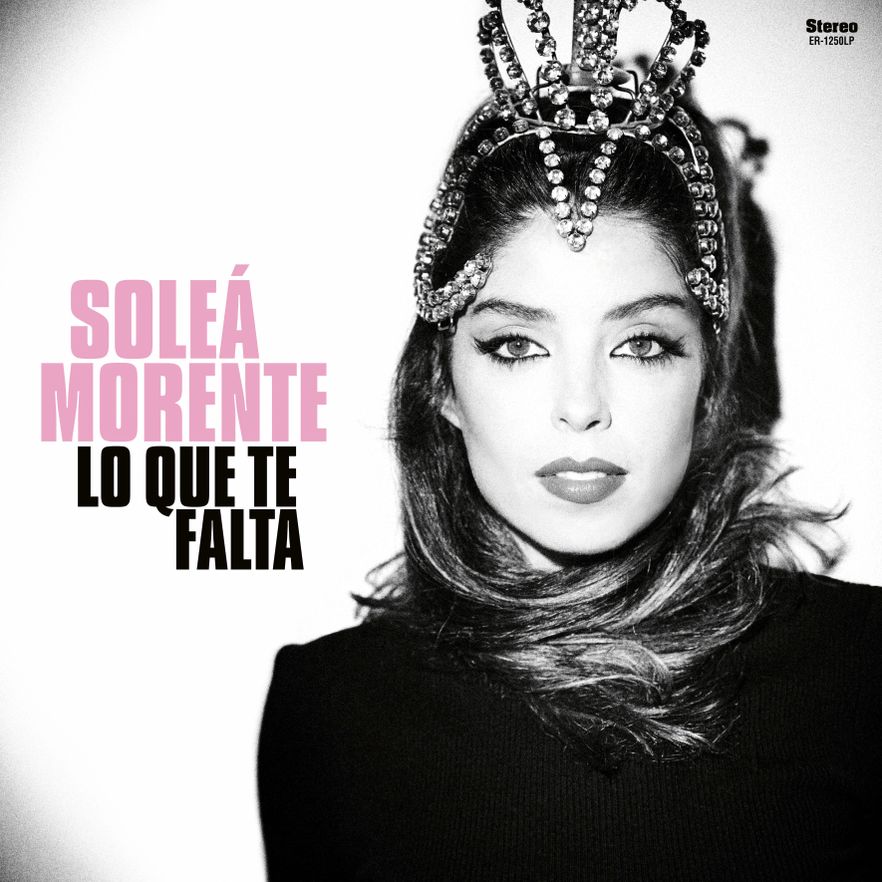 This is a major event for Elefant Records, and at the same time it is a release that somehow manages to close a circle that almost nobody knew was open. The magic of music. The thing is, the new album from Soleá Morente, produced by David Rodríguez, follows that rule about third albums: third albums are for reaffirmation, maturity, development. And, for the first time, Soleá herself has taken the lead role on songwriting for some of the songs on the album, which lets off exotic, rooted aromas but with an absolutely exceptional and marvelous sense of pop. Because Soleá Morente is a unique character on the Spanish music scene. Yes, because she is the daughter of the legendary flamenco singer, Enrique Morente and the dancer Aurora Carbonell, but also because the middle Morente child has always been permeable to other musical references and styles. That is why, on this album, credit is also given to songwriters like Ana Fernández-Villaverde (LA BIEN QUERIDA), David Rodríguez (LA ESTRELLA DE DAVID) and J (LOS PLANETAS). It is an exquisite cocktail; a square circle.

The result of such a collection of titans from the national scene is a combination of songs that take the rumba as their guide, and let it lead them through a series of very diverse and rich stories and musical references. But the first lines are for a song that deserves its own temple, one of the three songs that Ana Fernández-Villaverde contributed to the album. It is not the title track for nothing. “Lo Que Te Falta” is one of those songs that is an inimitable find. Time will make it an unforgettable legend. The way that Soleá mixes the passion and spirit that her last name is full of, with that essence of noise of David Rodríguez’s guitar, creates a path full of intensity. It is somehow parallel to the open spaces the venerated “Omega” left, but with a special, unique personality. And to top it off, there are the lyrics, which hit you right in the heart, the way this style of flamenco singing can, when the singer yells in her special style: “Si con lo que tienes no consigues ser feliz / Jamás podrás llegar a serlo con / Lo que te falta”(If you can’t make yourself happy with what you have / You’ll never be able to be happy with / What you’re missing). Devastating. Grandiose.

But this is not the only song that is straight from the cannon, and that is where “Coca-Cola” comes in. The song dances somewhere between raï and rumba, which gives a different touch to those Arabian influences that sometimes populate Soleá’s music. Or that marvelous bolero that is “No Puedo Dormir”, an exercise in absolutely moving and exciting delicacy, with that ending speeding up with José Ubago “José Bonaparte” and LAS NEGRIS– just a few of the collaborators the album is full of- singing the chorus. “Pero Es De Noche” also falls into that flamenco style, with intense distortion, with the support of Soleá’s brother, Kiki Morente, on backing vocals. Another wonder is “Cosas Buenas”, which we gave you as an advance a few weeks ago, with that Granada-style singing adapted by Soleá herself opening the song to make room for the exquisite piano arrangement by Carles Viarné and the pop accompaniment of CARIÑO.

And as for fast-paced rumbas, solid and clever, the album is full of them. EL PESCAÍLLAand Peret would overflow with joy seeing how the apple of their eye has grown. The opening “Cariño”, written by David Rodríguez and released on the most recent album from LA ESTRELLA DE DAVID, is a song that is full of irony and nastiness; we would have to quote it in its entirety to do it justice and adequately contextualize its powerful lyrics. What a marvelous way to breakdown a relationship that oversteps all its bounds, but is full of love. “Viniste A Por Mí” goes the opposite way with a musical exercise from the book, but to the spiteful beat of the fast-paced guitars from Eduardo, Víctor and MUCHACHITO BOMBO INFIERNO. And “Ducati” is straight up amazing. Cunning lyrics full of sarcasm that make use of part of the lyrics from “Ducati Luv” by YUNG BEEFand SOMADAMANTINA, and ends up with CARIÑO letting loose a chorus like this: “Papi, ya no quiero Ducati / Sólo te quiero a ti / Si te pillo infraganti / Llámame religiosamanti”(Papi, I don’t love Ducati anymore / I only love you / If I catch you red-handed / Call me praying mantis). Attitude. And something similar happens on “Tutti Frutti”, another new exercise in self-affirmation full of a sense of humor. Ah, if Elvis were alive! He wouldn’t be able to stop dancing!

Another exercise in musical recycling is “Mundo Nuevo”, in this case with a verse from “Una Gitana Del Rastro” by PARRITA. And the ventilador (a guitar technique where the player claps their hand rhythmically against the guitar case while playing the chords)which does not stop. The same is true for “Olvidarme De Ti”, whereAna Fernández-Villaverde leaves her clear, unmistakable mark in the lyrics: sensitivity, redemption, fatalism, and decisiveness. The album closes with a very special song, “Condiciones De Luna”, written by Soleá herself along with J (LOS PLANETAS). This is another change of tack that shows how “Lo Que Te Falta” differs vastly from an exercise in style: this is a work in ambiance, presided by David Rodríguez’s andÁngel Valiente’s keyboards, wrapped in Estrella Morente and Ángel Valiente’s choruses, and with a very specific phrasing, with DELAFÉ’s agile flow but Soleá’s melodic, interpretive personality. It is another incredible find, more unexplored territory.

It is difficult to express in words, these albums that are so rich in references, styles and nuances, capable of bringing together musical parameters that would normally be thousands of miles apart, and that come together with excitement and brilliance, emotion and intelligence. These are albums that can only be explained through the personality of their interpreter, and also, in this case, through the style and talent of David Rodríguez, our interpreter’s partner on the journey that is this album – producer of all songs, composer of some, and indispensable figure in understanding the album’s sound. But even further than that, Soleá and David have been surrounded by greats: the guitars of Eduardo Espín Pacheco and Víctor Iniesta; the percussion work of Ginés Pozas and Popo Gabarre; the bass of Julián Méndez “Checopolaco”; and the energetic choruses and singing of LAS NEGRIS,Rocío Morales,José Bonaparte,Tomasito, Kiki Morente, Antonio Carbonell, the girls from CARIÑO and Miryam Levy, among many others. Ultimately, just like the album’s title tells us, we were missing something. We didn’t know it, but we needed this.