With just two demos, “La Mecedora” and “Ultramar”, this Asturian duo formed by Nel González and Helena Toraño deeply impressed us. Their punk-pop sound is so spontaneous, so immediate and urgent that we needed their first official release to be part of the collection of new promises that our New Adventures in Pop is. The electricity of MY BLOODY VALENTINE, RIDE and THE JESUS & MARY CHAIN, the primitivism of BEAT HAPPENING, the instant shake-you-up of SHOP ASSISTANTS, THE VASELINES and THE PASTELS, reaching a perfect symphony between noise and melody. 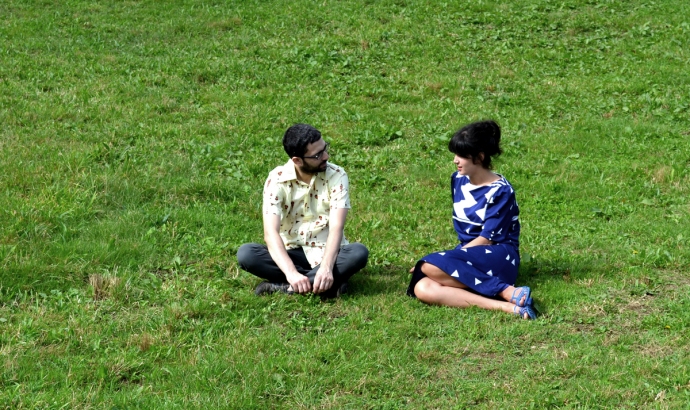 “Ultramarinos” seems to be directly extracted from “Psychocandy”, where their dreamy lyrics and layers of sound clash brilliantly with the brazen chorus and the guitar solo that is in and of itself an ode to indie-pop. “Ultramar, no te olvides protección solar” (Ultramar, don’t forget your sunscreen). Simply fantastic. “Temporal” is a song with echoes of MARINE GIRLS mixed with distortions, fuzzes and boosters. “Es Mejor” is another brazen A-side, with disconcerting lyrics because of the cultural analysis and irony it’s seeped with, but that returns to a base that is almost martial, influenced by their love of Krautrock, with serves as a support for the layers of feedback and melodies that stick together like gum to the sole of your shoe. “Nueva Ola” closes the marine theme with a freshness that we haven’t heard since TALULAH GOSH and THE SEA URCHINS, with those faded guitars over the insistent drums, and a melody that simultaneously affects your mood and your feet.

Four songs recorded in the Kaiju studios in Vigo, owned by Evaand Iván of LINDA GUILALA, undoubtedly the ideal duo to make the final touches on LOS BONSAIS’ songs, since nobody can understand better than they can the immediacy of their electric and addictive sound, and all of this wrapped up with the mastering of Bill Racine in Los Angeles.

Hyperactive and self-sufficient, in addition to having prepared and recorded the eight songs on their new record "Martín Pescador" and to their live performances over the past few months, Helena and Nel have also found time to make their own video-clips and release 4 editions of their fanzine “Temporal” (going back to the roots of the original fanzine format of photocopied paper). Helena also held her first art exhibition, displaying some of her work and demonstrating her exceptional talent as an artist, a talent that is clearly evident in the fascinating and captivating canvases she painted for the cover of the new record.

“Martín Pescador” marks them out as one of the most interesting noise-punk-pop bands on the spanish scene. Once again, Iván and Eva from LINDA GUILALA have handled the recording and production in their Kaiju Studios in Vigo.

Mini-Lp 10" "Martín Pescador" ... After the debut single for our collection “New Adventures In Pop” that caused quite a stir, LOS BONSÁIS are back with a Mini-LP that will be released in digital format and white 10” vinyl.

Release "¡Fanzine!", a vinyl single with covers of TV PERSONALITIES, THE VASELINES, BLACK TAMBOURINE and THE PASTELS