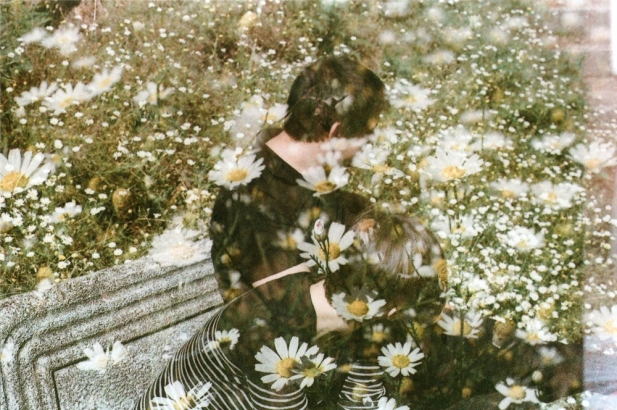 After the split of JUNIPER MOON at the end of 2005, Iván (former drummer and founder of the band) and Eva (the keyboard player who performed with the band in their last few shows), who already been working together apart from the main band, started their new adventure under the name of LINDA GUILALA.

Besides music, both of them are big fans of sci-fi, specially Japanese cinema from the 60’s and 70’s. “The X from outer space” (1967) is maybe the most fascinating movie they’ve seen, both image and story-wise. Guilala (Girara in Japanese) is a monster, a giant bird with three antennae who travels on top of a spaceship from Mars and, once on Earth, becomes giant and terrorizes Japan. They put the name Linda before the monster’s name, and Iván and Eva’s new band started going ahead.

To do their first home recordings they found inspiration in pop culture from the last four decades, with influences ranging from the girl bands from the 60’s to 80’s electro-pop or many of the bands from the so called C-86, always under the DIY spirit.

Some of their first songs were aired on “Flor de Pasión” (RNE, Radio3), a nationwide radio show directed by influential DJ Juan de Pablos. Based on those first tracks, the band does its first self-produced demo, for which they had the help of Argentinian bass player Ignacio Espumado.
Once the demo was ready, they started being played on many radio shows dedicated to independent music, such as “Disco Grande” (Radio3), “Toxicosmos” (UPV-Scanner FM), “Plástico Elástico” (Onda Madrid) or “La Merienda” (Canal Extremadura Radio); the latter being directed by Agustín Fuentes, director of the ContemPOPranea festival, who chose them as band of the week in his show.

Also outside Spain they have been played in radio shows from such distant countries as Mexico, Italy, Germany or Sweden, among others, climbing to the position of artists-of-the-week on Radio Nowhere (UK) and even being part of the best of 2006 polls on this same radio station.
Thanks to this first recording they’re also featured in many compilations in Mexico (“Saber perder”, on the compilation “Granada vol.2” from Molécula Records and also on the CD compilation that goes along with the comic book “Kid Houdini”), in the USA (“Te he cambiado”, on the compilation “YAY 4 Cuteness” on Valiant Death Records), in Singapore (“Mis ideas son”, on the compilation “Twee like me!” on Fruit Records), in Italy (a previously unreleased track, not included on the demo, “La reina debe morir”, on My Honey Records), in Argentina (“Te he cambiado”, on the Superclima label compilation) or in Perú (“Dulce maldición”, on the tribute to Christina Rosenvinge released by Ya estás ya Records).

On January 6th 2007, a few days after they finished their second demo, and after many mentions on a big number of blogs and e-zines, the band made their live debut in Madrid at an Elefant Records party in the venue Galileo Galilei, along with labelmates CORAZÓN and DJ Polar. A few days after this came the good news that their demo had been chosen as the second best demo from 2006 by the RNE Radio 3 show “Disco Grande”, directed by DJ Julio Ruiz.

Later on in the year, new shows add up to that first date: the party of the “Flor de Pasión” radio show, on March 3rd at Siroco (Madrid), and the festivals Minifestival in Salamanca (March 17th) and Plastidepop in Zaragoza (March 30th).

In the forthcoming spring they will start recording the songs of what will become their debut album.

In October, "Bucles Infinitos" is selected as album of the month on MySpace and all of the songs on the debut album can be heard online.

LINDA GUILALA is chosen as artist of the week by Radio Nowhere (UK) in the week of the 23rd of November.

"Nadie se Dará Cuenta" is the band’s first video-clip. It is recorded in León and directed by Juan Marigorta, who has worked with Elefant on other COOPER video-clips such as "Rabia", "Cerca del Sol" or "Cierra los Ojos".

In February, LINDA GUILALA begins a tour of concerts in Spain to introduce "Bucles Infinitos".

"Bucles Infinitos" is the band's second vide-clip, directed in Australia by the multifaceted Christopher Kenworthy. Fascinated by the sounds and atmospheres of LINDA GUILALA, Christopher has constructed a spectacular video-clip that mixes the disturbing lyrics of “Bucles Infinitos” with the duo’s personal tastes and esthetic preferences. It is a multi-colored and imaginary world full of all kinds of different objects with clear references to the world of Superheroes and the science-fiction personalities that Iván and Eva like so much, as well as to B-movies, comics and Pop-Art. Just like LINDA GUILALA’s music, the video for “Bucles Infinitos” oozes with infinite colors, otherworldly light and smooth and volatile textures.