The long awaited first album, “Humo y Espejos” will be released in April, filled with indirect messages to the world of science, literature, music and film. Both the title and the presentation of the album, a theatre illustrated in a pop-up digipak, make references to particular obsessions about appearance and reality, always concealed within the catchy melodies. Eleven songs and a cover of a Jonathan Richman song.

Text written by Belén of the group L KAN

WRITTEN BY ONE  “RARE MUSICIAN” ABOUT OTHER RARE FOLKS.

LA MONJA ENANA is not your typical group with a defined path. Throughout their long, and at times, slower than usual career, they have played in Sweden, Russia, Paris and they put out a compilation in France and Mexico. The band has also been Single of the Week in Melody Maker. All of this happened without much effort from the group. LA MONJA ENANA is relaxed because they know that every once in awhile, without having to move a finger, something un-heard of happens and changes their career. Perhaps its largely due to their scientific-literary-paranormal theme in their music or it could simply be that when you listen to their music without preconceived notions, you appreciate all of the wonderful tunes with a catchy melody, a crystal and natural voice, together with surprising sounds.

The fact is, LA MONJA ENANA has numerous fans in Spain anxiously awaiting for the release of their album, “Humo y Espejo.” We are folks who sell out their concerts, sing along to their songs and know the perfect gestures which go along with each line.  We understand the references of Philip K. Dick and Jack Clayton in their older songs and with their brand new songs, we’ll catch on to the references of Lemony Snicket in “Café Kafka” and of Jorgen Leth in “Humano Perfecto.” We are people who admire how all of this may convert into a song and sound so great, catchy and melancholic at the same time. We are people who are elated that a group like LA MONJA ENANA exists, because, someone finally has written a song like “Heróes del Pasado” about the glorious oldies and because they dare with one of the most unusual songs by Jonathan Richman, “I’m a Little Dinosaur,” offered as a bonus track on the album.

I have the amazing luck to have heard and learned all of the new songs and that’s why I must recommend, a part from the previous new songs mentioned, the catchy “Canción de Amor nº 3” a musical story about the things a technopop musician would do for love, with Battiato style guitars. The song “Ciencia Cotidiana” is about all of the scientific phenomena produced in our daily lives and is also another fine choice.  Don’t miss out on “Trucos de Salón,” “Raccord,”  “Nomeolvides” or  “Veinte Preguntas” all of these are fantastic songs about love, science and strange phenomena. This is one of the amazing things about LA MONJA ENANA: their terrific ability to speak about the rare stuff in life in a very simple and down-to-earth way. 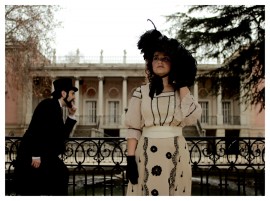