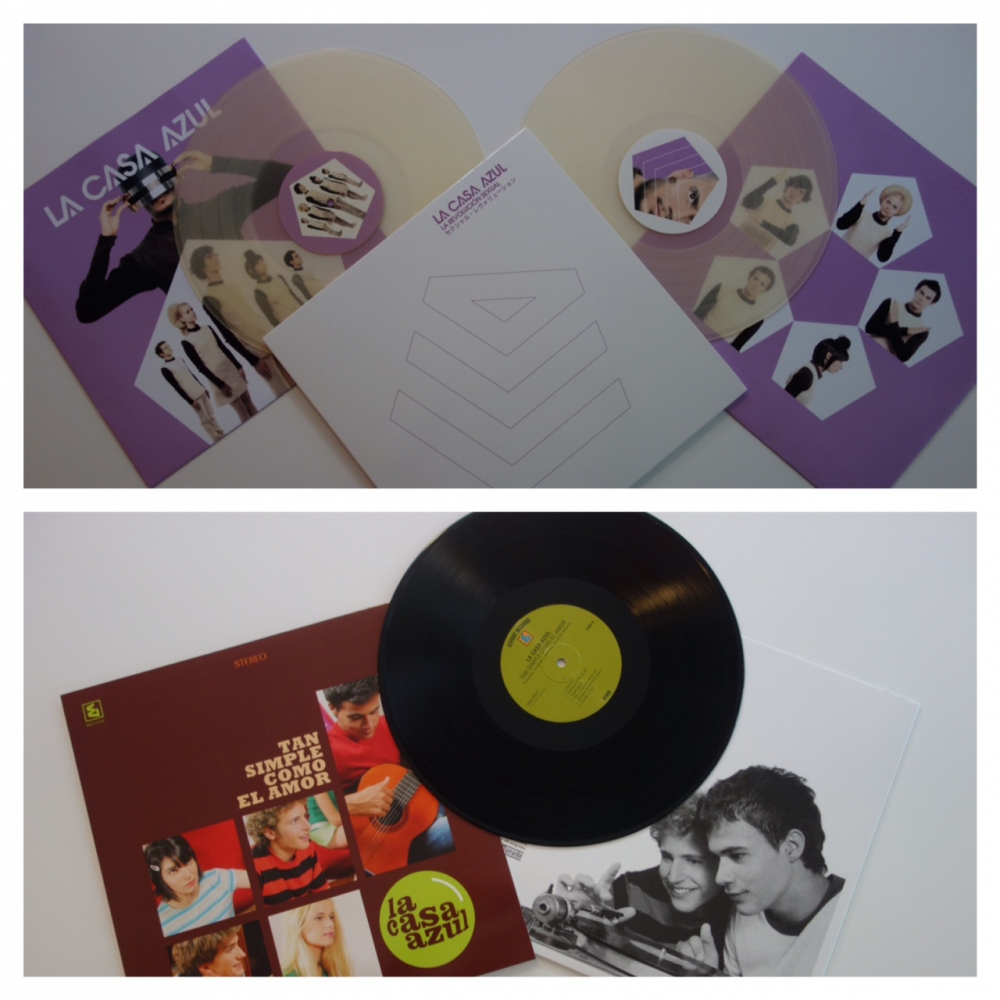 We are moving forward with our special collection of re-releases to celebrate Elefant Records’ 25th anniversary. In 2014 we turned 25, and we announced our plans to release a collection of 25 editions with a focus on vinyl, on attention to every detail in every release, some extra tracks and many surprises both for fans and for newcomers who weren’t able to buy the albums by THE SCHOOL, TREMBLING BLUE STARS, LE MANS, JUNIPER MOON and LOS FLECHAZOS, among others, when they were first released. We’re back to new re-releases from LA CASA AZUL, from the magnificent “Tan Simple Como El Amor” (in black, 1000-copy, numbered, limited-edition vinyl), and their big hit, “La Revolución Sexual”, with a special double-vinyl release, which will have the album’s original songs and the extras, covers of other groups and songs from the album in other languages with special collaborations, which were included on that second part of the album that was “Lo Que Nos Dejó La Revolución”. In this case, the release will be on transparent vinyl, with a different colored album cover and sleeve by Gregorio Soria, the original designer of the first edition of the album, as a numbered,1000-copy limited-edition.

When “Tan Simple Como El Amor” came out, LA CASA AZUL was already on the tip of everyone’s tongue. “El Sonido Efervescente De La Casa Azul” had made a huge impact on pop-lovers half the world over, and there were three years of waiting before this release that confirmed that Guille Milkyway was no one-hit-wonder, but something really special, to be worshipped, who would offer himself to us in order to transport us to the most amazing places pop could go. And did he ever!

That was the album when a lot of people thought LA CASA AZUL was 5 young guys. But most of all, that was the album that confirmed that Guille was going to be around for a while. Yeah, “Superguay” excited us to the point of exhaustion, and showed us that there was an eye more and more on the dancefloor. “En Noches Como La De Hoy” opened the album with one of those melodies with a touch of ye-ye that won us over forever. “Vamos A Volar” had an irresistible touch of disco-funk. “El Sol No Brillará Nunca Más”, groove and sampling, soul and disco, one of those hits that to this day is still one of the key moments in LA CASA AZUL’s live show. “Prefiero Bailar” was capable of blending a sixties sound with a touch of punk-pop, only to be another of those eternal songs designed to sing along to. The closing track, “Como Un Fan”, beyond perfect pop, that way of singing so fluidly yet with such a hook... And it’s like this with all the songs on an album that, once again, lifts our hearts with classics like “C’est Fini”, “Siempre Brilla El Sol”, “El Secreto De Jeff Lynne”, “Por Si Alguna Vez Te Vas”...

This album is being released on vinyl this time, after many years out of print, and will be part of the collection of re-releases celebrating Elefant Records’ 25th anniversary. A 1000-copy, numbered, limited-edition.

If we had to choose just one album from LA CASA AZUL, it would be absolutely impossible to make a decision. They’re all perfect, inimitable, and different. But there was definitely a before and after the album “La Revolución Sexual”. On an artistic level it is on the same level as other albums, making a definite jump toward dance music, using thousands of samples, but it still maintains its own identity and unforgettable memories... There are infinite cultural references, the definitive, almost total embrace of dance and electronic music, among others. But in terms of audience it meant definitive recognition, the one that took him beyond a specialized audience and turned him into a phenomenon. Songs like “La Revolución Sexual”, “Esta Noche Sólo Cantan Para Mí”, “Chicos Malos” and “La Nueva Yma Sumac” were some of the songs responsible for this, especially the first one, which was named as one of the favorite songs to represent Spain at Eurovision.

This is a key album in the history of this group and this label, that we are now re-releasing to celebrate Elefant Records’ 25th anniversary. Transparent double-vinyl that will also include the songs that were released on that delicious sequel, “Lo Que Nos Dejó La Revolución”, full of covers, remixes, and collaborations. The covers range from the impressive “Señora” by Joan Manuel Serrat to “I Want You Back” by the JACKSON FIVE, to John Paul John’s “Love Is In The Air” which became a classic in concerts as well as an authentic exaltation of love. The collaborations include Duglas T. Stewart (BMX BANDITS), THE APRILS from Japan, Yeongene, who is a total pop icon in Korean, and STEREO TOTAL from Germany.

Every last detail of this release is being carefully considered, and only 1000 numbered copies will be released. This is an amazing opportunity to get your hands on one of the most important albums in the history of pop in this country.