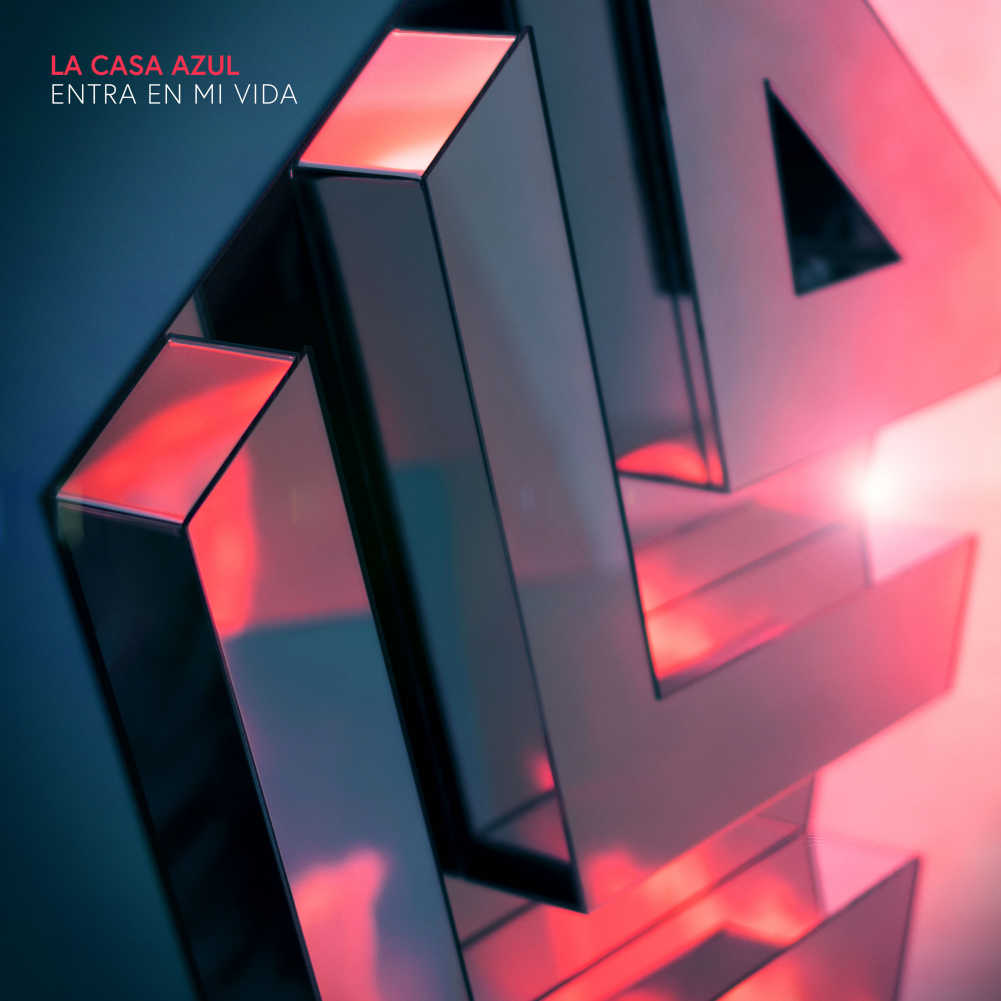 This is the kind of news that fills us with joy, that gives us butterflies in our stomachs and that feeling of euphoria. It’s what happens every time we get a new song from LA CASA AZUL, and even more so if it is the advance of a new era and a new album (that will be released in 2022). The thing is, “Entra En Mi Vida” is the gateway to so many things. Like that cover that shows us the logo the used for the first time on “La Revolución Sexual” (designed by Gregorio Soria and an absolute trademark for the group) like a new sunrise, tridimensional, titanic, splendid. New nuances of sound that continue to confirm that Guille is an exceptional and unique composer, capable of incorporating new sounds from the current musical scene, without losing even a drop of his own personality, reaching unexplored spaces and heights. That syncopated verse, that agile phrasing, rushed, almost hard to catch, could be a refractory mirror of the last snapshots of very well-known artists like DUA LIPA, THE NEIGHBOURHOOD and Demi Lovato, but above all it is also close to that new generation of artists that we like so much here at Elefant – INTERROGACIÓN AMOR, Maria Blaya, THE PIROUETTES, Arlo Parks, CLAUD, WORLWIDE PRINCESS, WHITEROSEMOXIE, Olalla.lux... But little by little the harmony opens, it begins growing (yes, those surges and ascents that are so his, because nobody else does that like he does) and the chorus comes in like a burst of light, rushing in, the musical leaps and style mixer go into full force. Psychedelia, northern soul, euro-pop, bubblegum, nu disco... Wind instruments, string instruments, stellar effects... Moving through the history of pop music from the last 60 years in 3 minutes and 38 seconds, you find yourself with the first LA CASA AZUL songs, with the great classics that made Guille fell in love with music and dedicated himself to it completely, from Juan y Junior to LOS ÁNGELES, from the BEACH BOYS to THE SUPREMES, from ELO to OMD, from SAINT ETIENNE to AIR, from PIZZICATO FIVE to THE GO! TEAM, from MAGDALENA BAY to BOY PABLO. It is a journey through time, to the past, the future, overlapping layers, small arrangements, thousands of details throughout a song full of references. And the lyrics – true as few can be: “Y es precisamente ahora / Cuando todo andaba mal / Cuando todos los problemas / Se agolpaban sin parar / Es precisamente ahora / Cuando apareces tú y la luz del sol / Entra en mi vida sin temor” (And it is precisely now / When everything was going wrong / When all the problems / Were piling up / It is precisely now / When you show up and the sunlight / Come into my life without fear). We could sing the exact same lines to LA CASA AZUL, now that we need hope more than ever. Like we said – an undying feeling of euphoria.

And we could expect nothing less from the video that comes with the Digital Single. It is a journey between the bucolic and the galactic, symbolizing an inward journey (that sitar) and that trademark futuristic esthetic that this time reaches exquisite levels of luminosity and preciousness. And really the video, and the whole visual aspect of this new period for LA CASA AZUL is designed by Forest Film Studio, which Guillem and Lluís are a part of, who have also been members of LA CASA AZUL for live shows for many years. And that confirms the expressionist feeling, that those bright, warm colors represent new steps that future LA CASA AZUL songs are moving toward. A new path is opening, and we want to enjoy it intensely while we open ourselves up to those rays of light.