Some groups in history are destined to be seminal, because they are the origin of a wide branch of bands and sounds. When Olaya, Juan, Stephen, Lucas and Mario wound up coinciding in AXOLOTES MEXICANOS, they never imagined that this band would be the beginning of their equal success in another collection of parallel projects. Hold tight: CAROLINA DURANTE, CONFETI DE ODIO, TEMERARIO MARIO, Stephen Please, NO FUCKS... And the list goes on.

The thing is, if there is a group today that can be a living symbol of the insulting and impertinent rebelliousness that is tied to the most irreverent youth, that group is definitely AXOLOTES MEXICANOS. They can soak themselves in J-Pop, manga, Marvel, the most disturbing punk, in Hammer and let out a collection of unquestionable and immediate hits. They just as easily go from the resounding kettle drum to the most deafening guitars, from rough, syncopated electronic rhythms to the most pristine and sing-songy melodies. Always with a cynical sense of humor, sometimes even aggressively so. The soundtrack of a generation, a mirror in which thousands of new bands are reflected, with an astonishing live show where they unleash a repertoire that includes hits like “Disparo De Amor”, “Doble Check”, “Cara De Idiota”, “Que Te Pires” and that dreamy version of “Renai Circulation” that has given anime fans so much to talk about. Because Olaya and company are sure that they are not about honoring previous sounds; they mark their own path, step by step, and in what are already almost ten years of history and experience, they can say with pride that they have gained power and strength, but have not lost even a drop of freshness and irreverence. Because there is not and will never be a group like AXOLOTES MEXICANOS, but their mere existence has planted the seed for so much more. Like we said, seminal. 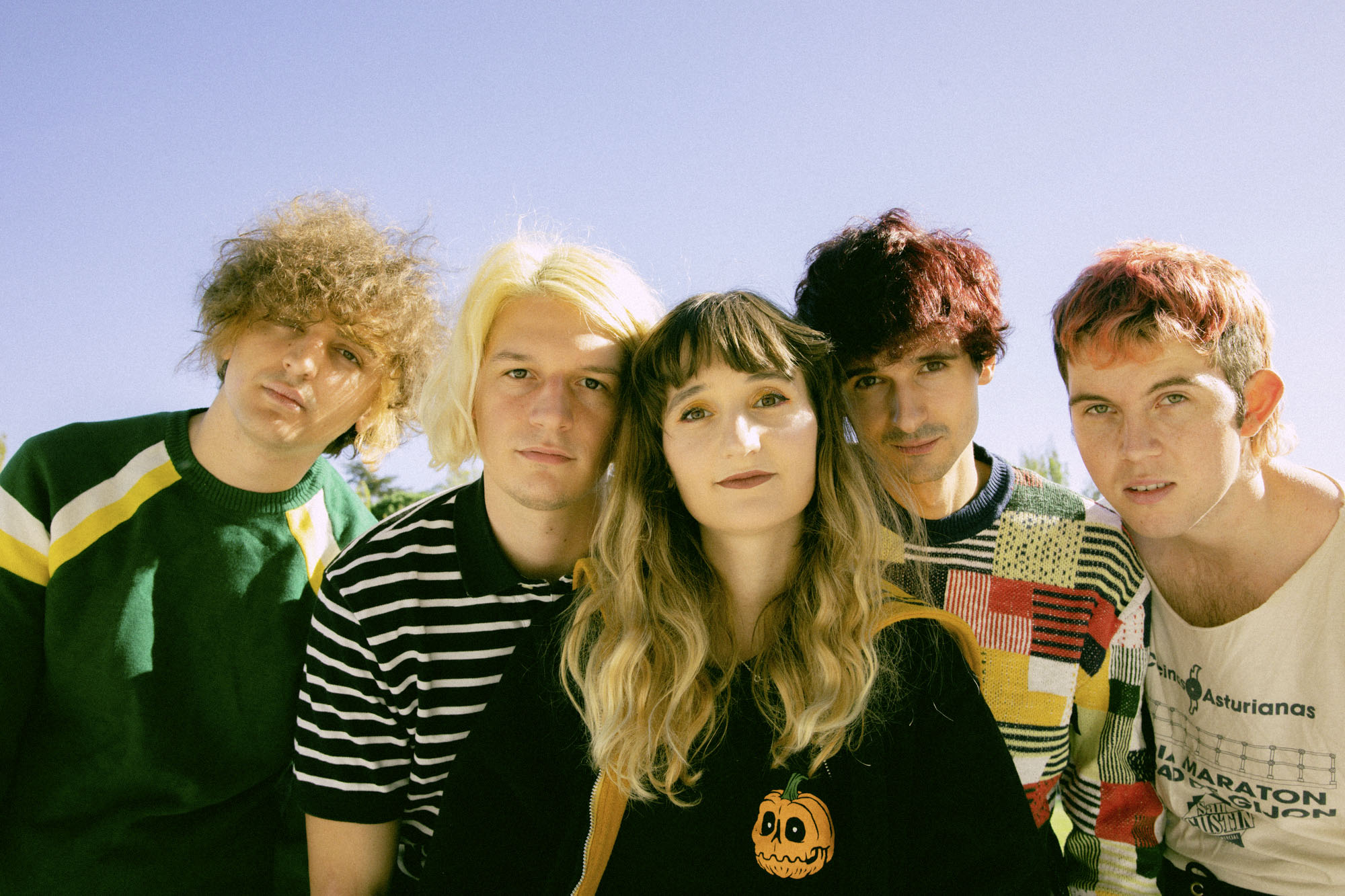 2013
“Infectados” is the opening-track and it pulls out all the stops. It is HELEN LOVE and PEGAMOIDES dancing pogo, with an inevitable aftertaste of JUNIPER MOON’s best songs, all wrapped up in one song that references one of the group’s biggest passions – zombies. “Sube La Canción” has a delicate, playful melody, but the mood breaks quickly: “Sube la canción o te reviento de un hostión”… “Te enviaré a mi hermano / o a una banda de rumanos / como no la subas ya…” (Turn the song up or I’ll beat you up … I’ll send my brother / or a gang of Romanians / if you don’t turn it up right now…). Definitely one of the band’s biggest hits. “Pandachila” plays perversely with their most naïve and childish side and the rawness of the unleashed guitars and sing-songy casiotones, and then leads into “Aborto”, where any remaining doubts are wiped out. It’s techno-punk with the bpms amped up, insolent and out of control, with lyrics that leave the concept of political incorrectness on par with a bad joke. AXOLOTES MEXICANOS evoke the wildest and most fun moments of the indie explosion that happened in the early 80’s in Spain, above all with their uninhibited lyrics that remind us of SINIESTRO TOTAL’s first songs, (“Las TetasDe Mi Novia”[My Girlfriend’s Tits], “Ayatolah!”, “Hoy Voy A Asesinarte” [Today I’m Going to Kill You], “Los Chochos Voladores” [The Flying Pussies]…); or KAKA DE LUXE’s songs (“Pero Que Público MásTonto Tengo” [What Stupid Fans I Have], “Viva El Metro” [Long Live The Metro]…); or SINDICATO MALONE’s songs, (“Sólo PorRobar” [Only For Stealing]…); or CÓDIGO NEURÓTICO’s songs (“Totus Tous”, “Pega A TuMamá” [Beat Your Mom]…); or GLUTAMATO YE-YÉ’s songs (“Holocausto Caníbal” [Cannibal Holocaust], “Algo SuenaTic Tac” [Something’s Ticking]…); or even like VULPES’ song “Me Gusta Ser Una Zorra” [I Love Being a Bitch]. The AXOLOTES have done their own adaptation of that last song as “Me Gusta Ser Una Gorda” [I Love Being A Fat Girl], with pearls like, “Si túme vienes hablandode dietas, me cagoen tu madrey te vomitoen las tetas” [If you show up talking about diets, I’ll shit on your mother and puke on your tits] or “Prefiero cenar yosola en mi cama, antes que acostarmecon quienme hablede ensaladas” [I’d rather eat dinner alone in my bed than sleep with someone who talks to me about salads].

It’s impressive to see the freshness and the attitude of AXOLOTES MEXICANOS. After their debut Single, the moment has finally arrived for their first full-length - a white, 10” vinyl Mini-LP in a 500-print limited-edition. The album is surprising right from the title, emoticon included - “Holi <3” - and with its front cover and liner, which show clear tendencies toward the J-pop that came out of Tokyo’s Shibuya district. Olaya Pedrayes, Stephen Lyne and Juan Pedrayes are beginning to show us their cards, among which there are clearly a good number of aces, the first of which is their unbiased, untroubled, and iconoclastic punk philosophy, and the second of which is this fantastic album full of hedonism and color.

"Trececatorce", a new Digital Single. The new single from AXOLOTES MEXICANOS has all the elements that make them unique: synthesizers taken from one of CAPSULE’s songs, harmonies and arpeggios that would make TOFUBEATS’ heads explode, super high speed pulled from PLUS-TECH SQUEEZE BOX and punk guitars that give shape to a new collection of perfect pop songs. Olaya, Juan and Stephen are all grown up, and if they wrote love lyrics about space monsters, zombies and wiener dogs before, now we can hear Olaya singingabout failedrelationships, love (a little) and losing love (a lot more).

Thirteen songs that show up so many of pop and rock music’s paths in recent decades, that show us a group that keeps its energy, its ease and self-confidence, and its irreverence intact, but also knows how to intelligently and skillfully handle a maturity that is starting to peer out from behind the curtain. We just cannot say it enough - AXOLOTES MEXICANOS have been and will continue to plant the seed for many things.

Olaya and her guys take the Opening 4 from the super famous anime show Monogatari, by Kana Hanazawa, rewriting it in Spanish, fusing it with BACHY’s Latin-styled version, and giving it that personal touch of theirs somewhere between hyper-pop, the most danceable techno-pop and a punk spirit. To celebrate the occasion, they invited CIBERCHICO (from the active Valencian collective, Toxic Pop) to work with them on a stellar collaboration, in a style that fits like a glove. The result – it’s the Nintendo Music dream team on the dance floor. That irresistible double chorus that we will sing until we can’t anymore. It is such a rush to sing and dance too on repeat.