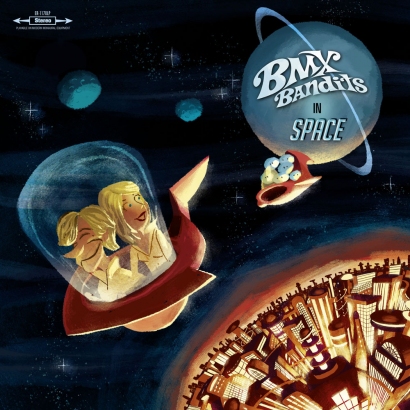 Astonishingly, BMX Bandits In Space is the sixteenth studio album from Duglas T. Stewart’s BMX Bandits in twenty-six years. The two decades of their existence have seen the Bandits switch lineups for almost every record — but this outing sees Stewart reunite with a few former Bandits, including Jim McCulloch and Sean Dickson of The Soup Dragons, and Norman Blake, a founding member of the Bandits, also of Teenage Fanclub.

The album is a concept album — in a rather loose definition of the term — dealing with “a man travelling through time and space in search of forgiveness and a way back home”. If it sounds bizarre that an album from a Bellshill indie icon is described in such a way, you haven’t been paying attention; and like most Bandits material that preceded it, on paper it perhaps shouldn’t work, but it does.

One of the things that makes …In Space stand out amongst the previous works in the BMX Bandits back catalogue is the unique collaborations on the album. While the Bandits have always seen various collaborators on their albums, this album sees Stewart work with Argentina’s Cineplexx, with wonderful results. The two songs they collaborate on, ‘Look At You, Look At Me’ and ‘Elegant Love’ (a reworking of ‘Elegant Lines’ from 2007’s Bee Stings record) serve as true highlights on the album.

For all the Cineplexx songs are highlights of the album, that’s perhaps paying an injustice to the other fifteen tracks on the record — make no mistake about it, this is Duglas T. Stewart at his peak. It just so happens that that peak has lasted some twenty-six years. BMX Bandits in Space, coupled with their previous two albums Bee Stings and My Chain, represent one of the true high points in the BMX Bandits career — long may it continue.