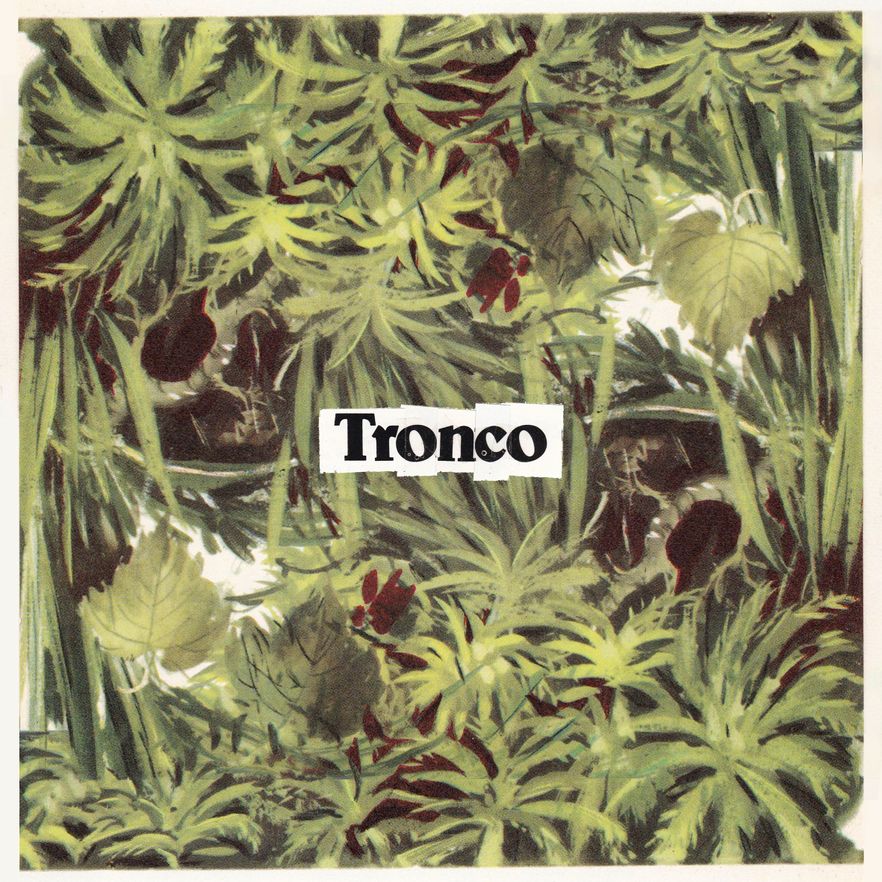 TRONCO is a unique and very special group. That’s why it’s impossible to write something normal about them. A brother and sister form a band in a parallel solar system. Because TRONCO is from another planet. It’s the perfect first album for our “New Adventures In Pop” collection. They’re new, they’re young, they’re fresh and daring, but above all they are overflowing with talent. Conxita Herrero (Barcelona, 1993) draws, makes comics, fanzines, and writes poems and songs, and she is really good at all of it. Last year she published “Gran Bola De Helado” with Apa Apa Comics, her first book with 17 short stories, which became one of the most interesting comics of 2016. She has worked for VICE and El País Tentaciones, and she has collaborated on a ton of underground fanzines. Her work has appeared in publications and anthologies both nationally (Fosfatina) as well as internationally (Kus, Fantagraphics). She’s a total activist. Pure dynamite. On the other hand, Fermí Herrero (Barcelona, 1999) is happily in his last year of high school in Prat de Llobregat. When he grows up he wants to be an actor and/or make-up artist and/or engine driver. He enjoys good weather, life, and fruit. He is interested in ancient history and culture in general. As they themselves say, “he smells good and is a good dancer”. His favorite food is toxic people and he is in favor of churros and the sexual revolution. He doesn’t normally answer WhatsApps, and the phone even less.

TRONCO writes songs to balance the growth of the void. They started playing together because their bedrooms were next to each other. They like the parties that develop when their mom, their aunts and uncles, their cousins, and their grandmother all get together for a meal. They are fans of Martirio, Antonio Machín, and what Fermí calls “calm music in general”. Meaning “it’s not tooheavy”. They love jokes, Gloria Fuertes, “The Catcher In The Rye”, Elías e Ignacio,María el Problema, COSMO K, David Shrigley,Alexis Nolla,Albert Pla, THE BEATLES, people from Havana and Cubans in general. The only things in the world they aren’t good at are (in a equal measure) serious obligations and writing promotional texts. They hate the oppressive state and fight against evil. Their favorite sentences are “you don’t have blood in your veins, you have caramel” and “a choco-kiss”. 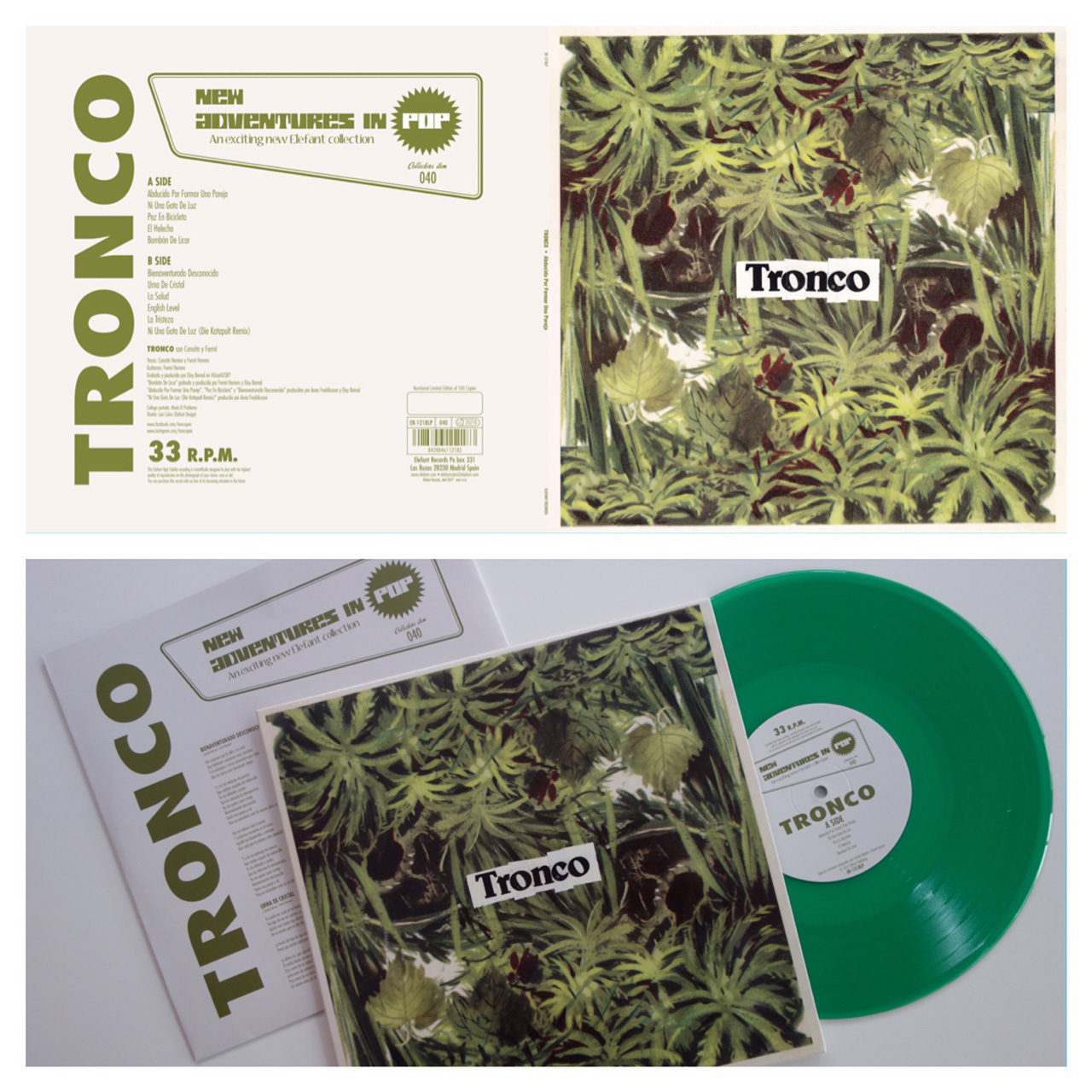 What does this all mean? It means an album like “Abducida Por Formar Una Pareja”. Press play. First, you’ll notice the surprise. What is this - a Tex-Mex rumba? TALULAH GOSH worshipping Peret? It’s beyond perfect pop! Because, “We don’t want boyfriends, or girlfriends, or anything that can be lied to, convinced, or abducted by a partner”. When “Ni Una Gota De Luz” starts, nothing changes and everything changes. Again, there is a Spanish guitar, choruses, and a small arrangement here and there from Eloy Bernal (NELEONARD, HIBERNALES, GÚDAR…), who was the distinguished producer and who organized and classified all the pieces of this fascinating puzzle. But for now let’s look at a kind of punk-folk song with dreamy fifties echoes and lyrics full of sadness that are sour and beautiful at the same time. How many times are they willing to sing that “En esa habitación no había ni una gota de luz / A no ser que yo ordenara / Abran la ventana / Suban la persiana / Salgan al balcón / Que se airee esta habitación” (There wasn’t a drop of light in that room / If I didn’t order it / Open the window / Raise the blinds / Go out on the balcony / Air out the room). Heritage and realism – that’s what TRONCO’s lyrics are, pure reality, like kind of spoken (sung) diary, that frequently feels like therapy for the protagonist. “Pez En Bicicleta” has one of those choruses that we will sing a lot; we can already say that with certainty. Something like an indie-pop “Cien Gaviotas”, bitter and luminous at the same time. “El Helecho” is both a generational anthem and a statement of intent.Conxita at her maximum-level of activism, using all her facets, her drive to always be doing something, and also her bitterness about being obligated to do these things in order to move forward. “Bombón De Licor” has Fermí collaborating with Eloy on the production work, and the result is a tribal march about a hungover night. The nocturnal jungle. Did we say impossible? That’s not possible.

“Bienaventurado Desconocido” is a total vendetta, resolved with cynicism and elegance, certainty and force, dedicated, as the song says, “to all those who don’t understand our concept”. “Urna De Cristal” goes aboveandbeyond, to grab onto a dark and macabre surrealism with a Tex-Mex rodeo rhythm, with a song length that corresponds more to a speedy punk song. “La Salud” brings it down a notch, without letting go of the sense of humor, satirizing fleeting relationships with a highly catchy chorus. And “English Level” is a new demonstration of that punk spirit, in case you had any remaining doubts. It’s punk because there are no prejudices, because they do not mince their words, they don’t have limits, and because the song is less than a minute and half long. “La Tristeza” feels like closure: for the first time there is desperation and emptiness, and Conxita’s tragedy is not without its sense of humor. The album closes with a remix of “Ni Una Gota De Luz”, by Anna Fredriksson (DIE KATAPULT, LOS GANGLIOS), who has also collaborated on the production of “Abducida Por Formar Una Pareja”, “Pez En Bicicleta” and “Bienaventurado Desconocido”.

The truth be told, we don’t know if we have explained this well, but at least we think we have given enough clues for you to make your first approach to this fresh, agile, fun, and exciting album. Because it is difficult to explain something when you don’t know very well what it is, but it really affects you. Because any way of digesting this leads to more questions than answers. Why TRONCO? Why this album title? Why this instrumentation? It doesn’t matter; that’s part of the magic. We are already abducted. As much as TV PERSONALITIES, AVENTURAS DE KIRLIAN, THE CAROUSEL, Adam Green, FAT TULIPS, THE SOFTIES and PURÉ abducted us in their day.