The Sound Of Confusion [Uk]: "If Words Could Kill" review

The Silver Factory - If Words Could Kill 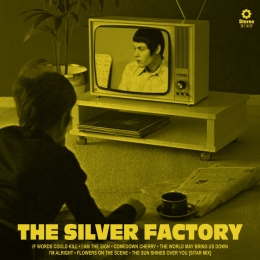 Ah indiepop, most of us have fallen in love with you, got fed up and trotted off to explore the plethora of other sounds out there, only to come crawling back to the irresistible sunny melodies, alluring guitar chimes and simple pop appeal. Countless bands have come and gone, adding their own twist to the well worn format, with forerunners like Love and the spangly guitar work of The Byrds, through to the output of cherished 80s indies such as Sarah Record, legendary Glasgow imprint Postcard Records and many more since. Indiepop is as cherished now as ever and The Silver Factory unashamedly recreate those classic sounds on this debut mini-album.

Taking their name from Andy Warhol's work studio, the band were formed in 2008 by Fran Feely and have undergone a few incarnations before settling on this definitive line-up, and signing to respected indiepop label Elefant Records was the icing on the cake and the stage was well and truly set. 'If Words Could Kill' is wilfully derivative, setting out to recreate and recapture the vibes of those classic records of the past. So yes, it's jangly, fey, engineered for bedsits rather than arenas and, naturally, best experienced on its 10" yellow vinyl format. Describing their sound is somewhat futile, because you know it already.

A few highlights though: they indulge their Beatles fetish by coating instrumental 'The Sun Shines Over You' in sitar, of course the songs all hover around the three minute mark; there's nothing here that's unnecessary. Floppy and upbeat songs such as 'If Words Could Kill' and 'Comedown Cherry' are delightful. 'I Am The Sign' allows itself to almost embrace country music. A great bass line drives the twinkly 'The World May Bring You Down' and throughout these seven songs ringing guitar riffs, shuffling percussion and soft vocals rule the roost. It's lovable indiepop, and it's defiantly indiepop as we already know it, but to anyone who likes those kind of guitars and these kind of songs 'If Words Could Kill' will be a welcome addition to their collection.