The birth of THE SILVER FACTORY is one of those romantic stories you hear about all the time- the one about the huge music fan who seeks other musicians to share interests and passions with. The band began in the summer of 2008 in the head of Fran Feely, who, after a lot of experience in groups with sounds of the sixties, decided to start a musical project which embraced some of his musical heroes from the eighties, such as THE STONE ROSES, THE FIELD MICE, THE SEA URCHINS and other groups from the C-86 movement, but at the same time, reflected the passion for some other bands from the sixties like THE RONETTES, THE SHANGRI-LA's, THE VELVET UNDERGROUND and THE BYRDS. His prior musical experience is vast but is most notably known for an EP he released for Detour Records with THE PSYCHOTIC REACTION, a group with a large following and which played on the show of John Peel. 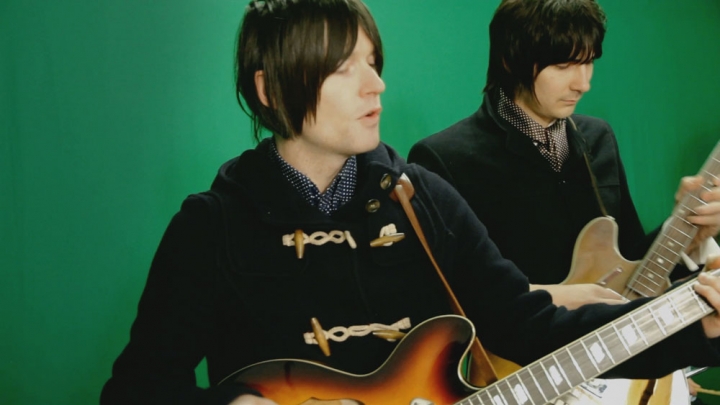 The name of the group was inspired by Andy Warhol, since THE SILVER FACTORY was the name Warhol used to refer to the studio where he worked and where he met with people who swarmed all over him. With a large handful of songs already composed, he started the search for bandmates and soon started to play again with his brother, Peter Feely. Peter was the singer of the band until the beginning of 2011 when Marc Johnston entered the scene to take up vocal duties. We heard Marc recently sing with THE JUNIPERS, a successful band with only one release as of date, “Cut Your Key” with San Remo Records, the label of Marco Thomas, FELT’s guitarist and member of FLY (FLY is a unique and splendid instrumental album put out by Elefant Records which contains collaborations of other members of FELT and PRIMAL SCREAM). The album of THE JUNIPERS was produced by Gavin Monaghon (KINGS OF LEON, THE EDITORS, and RYAN ADAMS) and was spectacularly received by Uncut, The Word and Record Collector, as well as DJs and radio folks from the BBC such as Steve Lamacq, Marc Riley, Bob Harris and Mark Radcliffe. Due to artistic differences, Marc left the group and after a hiatus, decided to unite with THE SILVER FACTORY.

Luke Headland (bassist, THE CARNABYS) answers and advertisement and joins the group in April of 2010 and is shortly followed by the entrance of Paul Hobbs (drums). Completing the line up is Jacob Parker on lead guitar. Jacob had been involved in groups with Marc and Fran in the past and was the bassist in THE SILVER FACTORY prior to Luke joining. Due to having similar musical influences, he was a natural fit with the jangly pop sound.

Finally we can get back to the first reference which will soon form a part of our collection of New Adventures in Pop. A limited edition green vinyl 7” which contains four songs- an ode to the indie pop which gave us the goose bumps, such as groups like THE JUNE BRIDES, CHOO CHOO TRAIN, MOOD SIX and CLOSE LOBSTERS, but at the same time leaving its own melodic marksmanship of the sixties with groups like THE ZOMBIES and THE LEFT BANKE.

“The Sun Shines Over You” reminds us of the beginning of the band of Ian Brown, and we immediately hear the sounds of crystalline arpeggios filled with chorus, full melodies filled with vitality, to complete one of the best songs we have heard all year long. The song, “She Smiles” follows this tune and is one of those songs which reflects the inevitable affinities and the sounds of the sixties such as THE HOLLIES and THE MONKEES, with an intensity and elegance which makes us cry, and occasionally reminds us of a mix between THE RAZORCUTS really cheerful and the beginning of the career of PRIMAL SCREAM.

On the other side of the record, “I’m Not Young Enough to Know Everything,” a song very reminiscent of THE SMITHS, is another fantastic hit of the latest Elefant group where it is obvious that Fran Feely wanted to mark the group since its creation with grand melodies and meticulous lyrics. Lyrics including, “All the heartaches don't mean a thing / Cause I'm not young enough to know everything.” Finally, “Tomorrow’s Today” brings the album to an end with the wonderful arpeggios and enormous guitar riffs, some of the most exciting we have heard in the last few months.

To share with the release of this album, we are also presenting the video, “The Sun Shines Over You” with a melancholic aesthetic, with granulated features and an analogical haunting. A precious video which shows the universe that surrounds THE SILVER FACTORY and in which we can see the group accompanied by their friends, with a special appearance of Sean Thomas, member of the mythical group, THE MYSTREATED.