Same Stuff: In Which I Belatedly Catch Up With The Great 2017 EP From The Primitives On Elefant Records 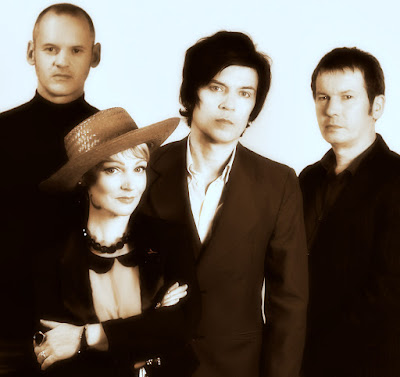 It is absolutely inexplicable to me that I somehow missed this new EP from The Primitives for nearly 5 months. It's not like I don't pay attention to this sort of thing!

The Primitives -- Paul Court, Ralph Moore, Tig Williams, and the inimitable Tracy Tracy -- returned with the superb New Thrills EP earlier this year, on the esteemed Elefant Records label. The release, the band's latest in their recent renaissance, is a clutch of new songs that have every bit of the spark that made this band's music so important, and fun, in the past. "I'll Trust The Wind" purrspast in the manner of "I'll Stick With You", while "Squeak 'N' Squawk" is a nice fuzzy stew ofNuggets-era influences, the same sort of riff on the Standells template, for instance, that drove this band towards some sort of indie-pop glory in the Eighties. Elsewhere, the achingly lovely "Oh Honey Sweet" sees Paul Court take over lead vocals for a number that suggests to a listener a more melody-driven approach to the same sort of thing as early Jesus and Mary Chain singles, while "Same Stuff" closes the EP with a cut that echoes "Spacehead" and other numbers from the band's debut proper a few years back.

If anything, New Thrills is proof that The Primitives have maintained a level of quality that other bands on the 'comeback circuit' should also pursue. As blissfully Pop as the best Primitives songs always were, the chiming numbers here on the band's new EP are stellar examples of the best sort of indie-pop, the kind that's sure to please long-time fans of this band.

New Thrills is out now via Elefant Records. More details on the adventures of The Primitives available via the band's official Facebook page.

Source: A Pessimist Is Never Disappointed