We were already spreading the word with that Christmas gift THE PRIMITIVES gave us – PJ Court’s band has a new album! This is great news! The reunion that came about as a result of the death of their bassist, Steve Dullaghan, and that put them back on stage after 17 years away, has culminated in a surprising album that is full of energy and that shows that the authors of “Crash” are still in enviably good shape.

What’s more, “Echoes and Rhymes” really grabs the attention. All of the songs selected for the album are versions of songs by obscure, female-fronted groups from the sixties. Curiously, the album is a long way from suffering from disparateness; these Brits knew how to make each and every one of the songs on this marvellous album reflect and mesh with their electric personality. They took over these songs with surprising urgency and energy while still managing to salvage the marvellous essence of melodies that were born in the decade that most-cared for such things. The result is a tremendously addictive album, seasoned with a sixties-halo that functions as a vindication and takes us directly to research every one of the (in some cases) little-known names that make up the details of its track-list. Who doesn’t wonder what incredible songs can be included in the repertoire of someone who wrote songs like “Turn off the Moon”, “Sunshine In My Rainy Mind” and “I’m Not Sayin’”?  From garage to psychedelia, with touches of soul and sunshine pop, multiple styles come together to form a special type of compilation, revisited with all the love and affection and energy of THE PRIMITIVES. Following their love for independence, but with their unchanging capacity to reach everyone, as they already proved with their first recordings more than twenty years ago. 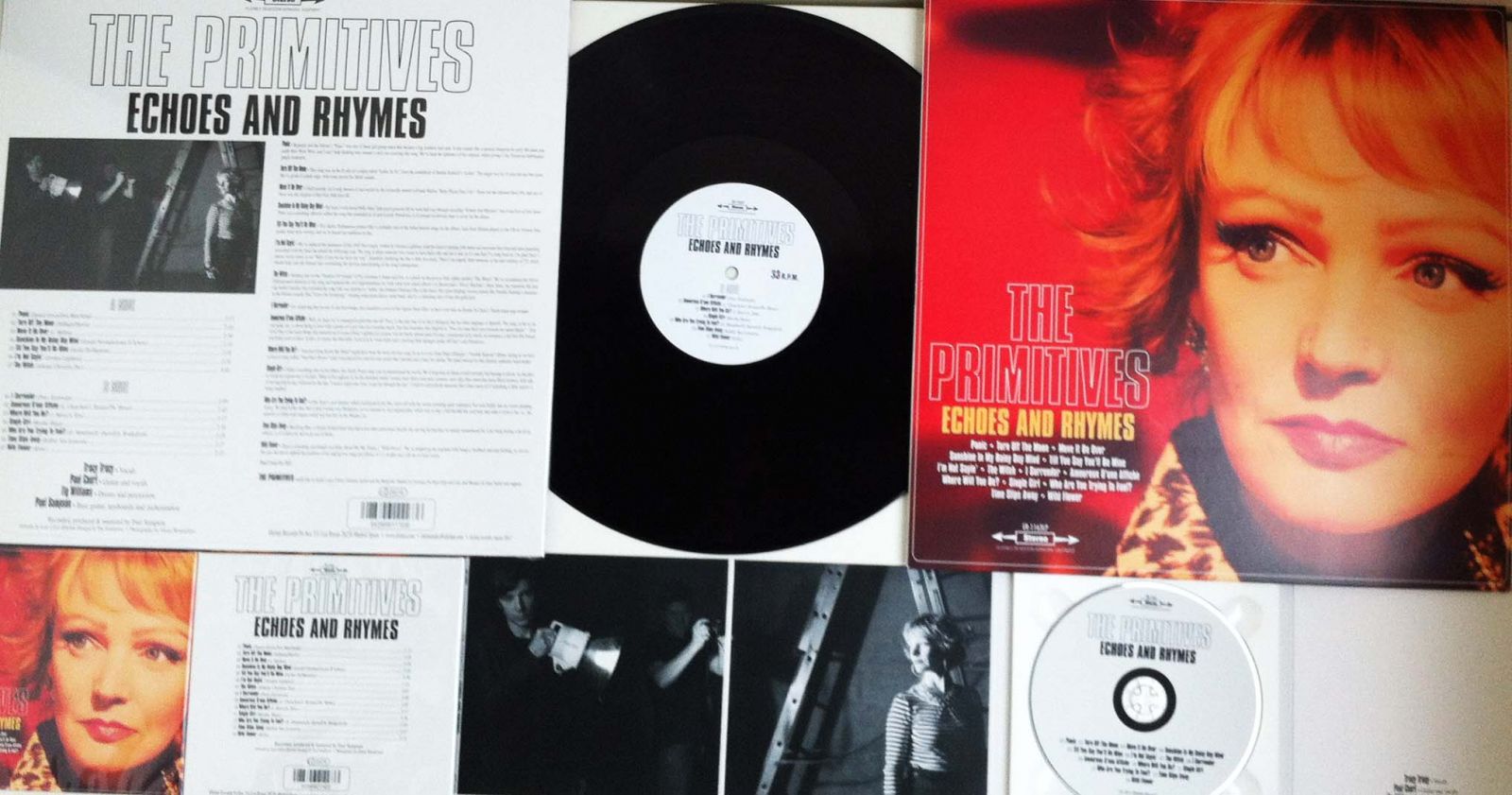 Although the original line-up that THE PRIMITIVES started with in Coventry (England) included PJ Court (vocals, guitar), Keiron McDermott (vocals), Steve Dullaghan (bass) y Pete Tweedie (drums), before releasing their first and successful album, “Lovely”, in 1988, Tweedie had already been substituted by Tig Williams, and Mcdermott was replaced by the platinum blonde Tracy Tracy, the band’s true icon. Coming out of the independent scene that bands like THE JESUS & MARY CHAIN, THE WEDDING PRESENT, MY BLOODY VALENTINE and PRIMAL SCREAM came out of, this line-up found the perfect balance between the crystalline guitars of THE BYRDS, the agility and speed of RAMONES and the unforgettable melodies of ORANGE JUICE.

Paul Courtand Tig Williams continue to participate in diverse projects (STARPOWER, HEDY), while Tracy brings her voice to other bands, like BAND OF HOLY.

The band reunited in their hometown of Coventry at the end of 2009, to pay homage to the recently deceased Steve Dullaghan, the group’s original bassist. Thesuccess of their performance and the public’s positive response after more than 17 years away from the spotlight led them to do a UK tour in April 2010 (where they headlined the Indietracks festival) and to play a few shows in Europe and the US, during which they stopped by Spain to blow everyone away at the Contempopránea and Lemon Pop festivals. In March 2011 they release two new songs and two covers of songs by dark-lensed, female-led sixties groups on their EP “Never Kill A Secret EP”, released by the English label Fortuna Pop!. Both covers were the beginning of their much-anticipated new album, “Echoes and Rhymes”, which gives itself over completely to this concept, with covers of artists like Dana Gillespie, Polly Niles, Olivia Newton-John, ADAM AND EVE, Sandy Posey,Laura Ulmer andREPARATA AND THE DELRONS. This covers album will be released by Elefant Records at the beginning of 2012. We’re already impatient to get to hear this new material.

Track by track by Paul Court [THE PRIMITIVES]

• Panic • Reparata and the Delron’s “Panic” was one of those girl group tunes that became a big northern soul spin. It also sounds like a musical blueprint for early 80s punk pop outfit Bow Wow Wow, and I can’t help thinking they missed a trick not covering this song. We’ve kept the spikiness of the original, whilst giving it the Primitives bubblegum/jangle treatment.
• Turn Off The Moon • This song was on the B side of a single called “Lolita Ya Ya”, from the soundtrack of Stanley Kubrick’s “Lolita”. The singer was its 14 year old star Sue Lyon. We’ve given it a punk edge, with some period Joe Meek sounds.
• Move It On Over • Until recently we’d only known of one record by the exotically named LeGrand Mellon “Baby Please Don’t Go”. Turns out she released three 45s, and one of those was the original of this fiery little kiss off.
• Sunshine In My Rainy Day Mind • We hadn’t even heard Polly Niles’ folk psych groover till we were half way through recording “Echoes And Rhymes”, but it was love at first listen. There was something inherent within the song that reminded us of post Lovely Primitives, so it seemed an obvious tune to cover for the album.
• Till You Say You’ll Be Mine • This Jackie DeShannon penned ditty is probably one of the better known songs on the album. Luis from Elefant played us the Olivia Newton John garage band style version, and we’ve based our rendition on that.
• I’m Not Sayin’ • We’ve replaced the jauntiness of this 1965 Nico single, written by Gordon Lightfoot, with the kind of chiming folk drone and incessant floor tom and snare pounding associated with the band she joined the following year. The song is about someone who wants to have their cake and eat it and, as it’s one that I’ve sung lead on, I’m glad Tracy’s unison vocal comes in on “Baby if you let me have my way”, hopefully rendering the line a little less tacky. There’s an angelic little harmony at the end courtesy of TT, which should help coax the listener into overlooking the devious pussyfooting of the song’s protagonist.
• The Witch • Nothing else on the “Paradise Of Sounds” LP by Germany’s Adam and Eve, is a patch on the groovy little oddity entitled “The Witch”. We’ve accentuated the Velvet Underground elements of the song and replaced the owl impersonations etc with wind style sound effects a la Hawkwind’s “Silver Machine”. Janie Jones, the notorious 60s pop star turned madam, also recorded the song (she was married to ’Adam’ aka Johnnie Christian Dee at the time). Her spine-tingling version sounds like Fenella Fielding’s character in the British comedy film “Carry On Screaming”, fronting some proto-heavy metal band, and it’s a charming slice of late 60s goth rock.
• I Surrender • It’s surprising that no one, to our knowledge, has recorded a cover of this hipster floor filler, so here’s our take on Bonnie St Claire’s Tamla-esque pop stomper.
• Amoureux D’une Affiche • Well, we hope we’ve managed to pull this one off. Tracy is the only one of us that’s bilingual, but her other language is Spanish. The song, as far as we can make out, is about being in love with a poster of a girl who isn’t wearing much. One line translates into English as “Two sirs raise their eyes towards my naked thighs” - Ooh la la! One of the main things that attracted us to Laura Ulmer’s spirited yé-yé gem, was its brash, almost punk fervour; a sound and style which, in retrospect, a fair few 60s French pop tunes seem to have. It also, of course, has that killer ‘la la la la la’ vocal hook and a cracking little arpeggio guitar riff that’s very Primitives.
• Where Will You Be? • “You Just Gotta Know My Mind” might have been the more obvious song for us to cover from Dana Gillespie’s “Foolish Seasons” album, seeing as we used to have a song called “You Don’t Know” (only ever played live and not very good) that sounded just a tinsy bit similar. We opted instead for this dreamy, anthemic heart melter.
• Single Girl • Unlike everything else on the album, this Sandy Posey song was an international hit record. We’d forgotten all about it until recently, but hearing it afresh, we decided it would be a good one to include. What at first appears to be the standard, lonely woman must find a man type scenario, soon slips into somewhat more illicit territory, with talk of having rent to pay, followed by the line “I need a night time love, to get me through the day”. Could be all perfectly innocent, but it does seem as if something a little saucier is being implied.
• Who Are You Trying To Fool? • Little Anne’s soul shouter, which resurfaced in the 90s, starts off with the vocals sounding quite restrained, but soon builds into an octave jumping frenzy. We tried it like that, but it didn’t sound very Primitives, so we resorted to our original plan, which was to take a full throttle 60s soul tune and calm it down a bit, i.e., the opposite of when soul singers would tear into hits by the Beatles, etc.
• Time Slips Away • Shocking Blue, a female fronted band who had a few other good tunes besides the one big hit that they’re mainly remembered for. Can’t help feeling a bit of an affinity, so of course we had to do one of theirs.
• Wild Flower • There’s something unwittingly psychotic about The She Trinity’s “Wild Flower”. We’ve ramped up the mayhem with bongos, feedback and amp kicking, as you do. We also decided to uphold the tradition of me singing two songs per album, so it’s another one with me on lead vocals.

CD and LP formats available on our online store

Video-clip of "Turn Off The Moon" on sale on iTunes

Video-clip of "I'm Not Sayin'" on sale on iTunes