THE HEPBURNS were born in the Welsh city of Llanelli, Carmarthenshire county. They formed in January 1985 and have recorded 10 albums, four singles and four BBC sessions in their 32-year career. They also toured the US and Scandinavia in 2017. Born of the post-punk, indie boom of the early-80s, but with their roots in the 1960s, their sound is an amalgam of indie guitar pop with Burt Bacharach, Jake Thackray, and Jonathan Richman as references. 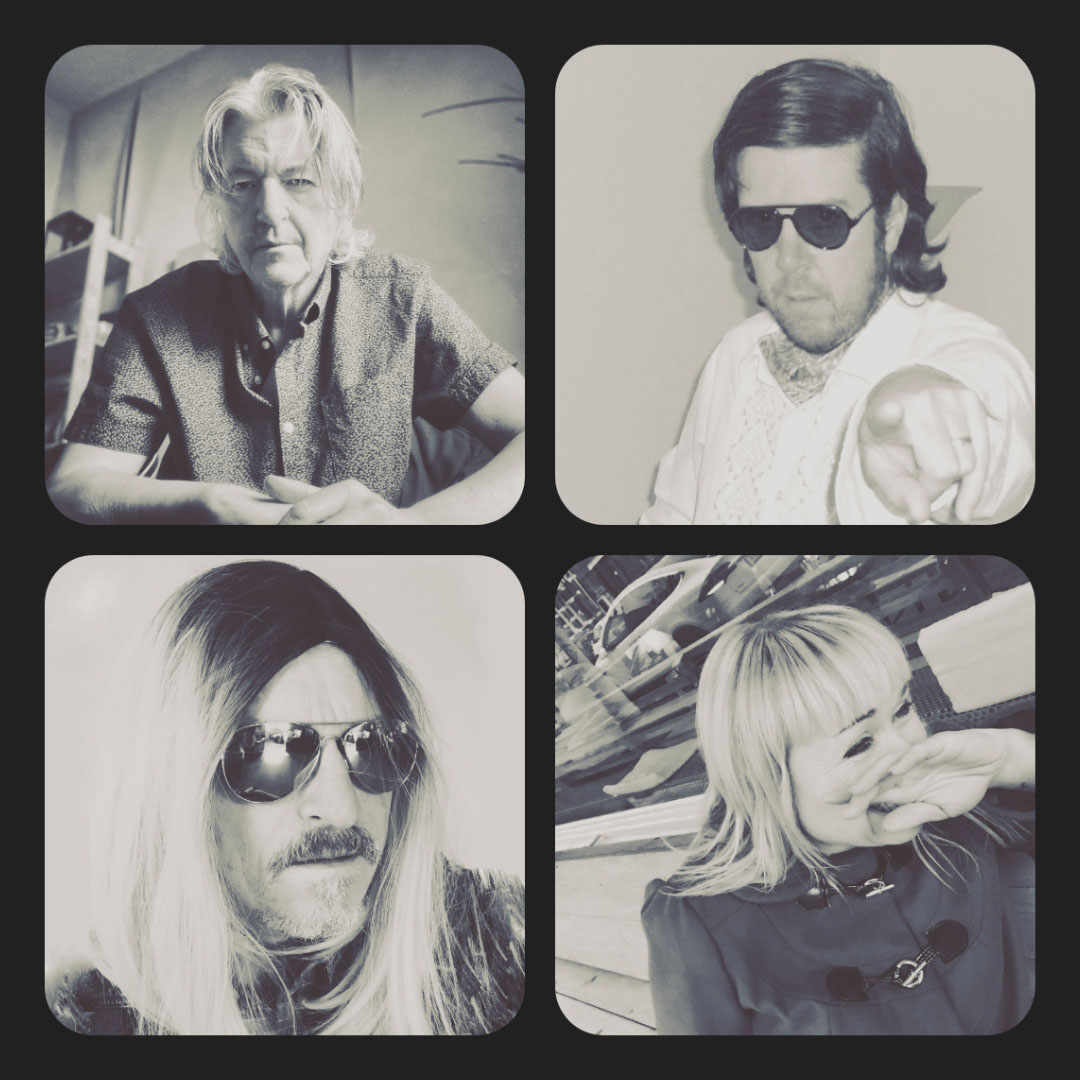 They got off to a running start. Their first full length, “The Magic Of The Hepburns” came out in 1988 on one of the flagship labels in the history of indie-pop: Cherry Red. They signed a five-year contract with them in 1986, but something just wasn’t fitting right with the British label, and despite a collection of songs that included such incredible tracks as “Five Twenty Five” and “Swimming Through Silk”, which could have tied them to other masters of pop like PREFAB SPROUT, THE SMITHS or THE MONOCHROME SET, they wound up leaving the label soon after.

As a result, they started their own label, Magic Records, (along with one of the people in charge of Cherry Red, Scott Langley) and in 1989 released the single “Electrified (From Countryside To City)”. In 1989, the line-up consisted of Matt Jones (guitar, vocals and keyboards); Mike Thomas (bass); Les Mun (drums); Nigel Boulton, aka The King of Wales (solo guitar) and Cronsey Jones (harmonica). Les left the group and was replaced by Aled Richards (CATATONIA). They recorded “Road Movie” with him that same year, which was conceived of as a sort of vengeance against Cherry Red, mixing the indie sound that was so hot at the time with radically different influences like XTC, LED ZEPPELIN and THE CARPENTERS. Sadly, the death of Scott’s father led to the album never coming out, until more recently, when it was released in digital format in 2017.

The group began to carry the label of unaccepted outsiders. Even in the mix of indie-pop groups, they were considered different because of their noticeable Welsh character, their sharp, biting sarcasm, and their influences from the great chamber pop classics like John Barry, Ennio Morricone and Burt Bacharach. The context and adverse situations led to a decade-long silence.

Then in 2000, Radio Khartoum offered them the infrastructure and support that the group needed, and they released “Champagne Reception”. The philosophy of THE HEPBURNS was intact and shining: character sketches inimitably drawn, and precisely arranged guitars and celestial backing vocal. The cinematic sensibility which was lost on the UK press ten years earlier was still there, and quite possibly stronger than ever. The heart of the band was still Mike and Matt, but this time they also included Pat Grover on drums and the collaboration of Simon Wright. Like the promo read then: “a soundtrack for a film set in a village of dilapidated buildings, obsolete soda pop machines, and gardens, haunted by the ghosts of boxers, Disney’s pirates, Nick Drake and Jackie Onassis”.

In 2003, “The Last Thing I Saw Before I Said Goodbye” came out. Once again, it was a gallery of impossible characters, painters, boxers and revolutionaries, who moved between comedy and melancholy. The preciousness in the vocals and arrangements continued to be their trademark, and the hymns of the stories’ losers held on to the belief that humor comes from the worst things in life. There were also two new faces in the band’s line-up: Jen and James White, on the flute and the trumpet, respectively. Immediately, that same year, they released a single that made the band’s state of inspiration clear. “Deciphering Linear A” is an exquisite gatefold cover that included a double format: a 7” vinyl and a 3” CD. All of this to release an absolutely marvelous song that was totally deserving of something like this: “What If Everyone Got What They Wanted?” is an ode to missed chances, a song that deserves a side to itself. Matt says they recorded the song in just 10 minutes, but that spontaneity and freshness, luckily for the rest of humankind, was caught on tape for posterity. The B side with “Chrysanthemum Fountain” and “Sierra Alpha One Five” was another perfect example of “THE HEPBURNS' style”.

“Something Worth Stealing” (2007) was an apparently lighter album in its lyrical conception, but ended up hiding impossible characters in incredible situations, playing with imagination and resignation in a way that only Matt “All Welshman Are Liars” Jones could have perpetrated. And of course, there is also a song dedicated to Velma from Scooby-Doo... The wind instruments from the Whites took on greater relevance, and the instrumentation started opening up, enriching the sound of another stratospheric album with the unforgettable hit: "The Last Thing I Saw Before I Said Goodbye".

The following year, they released a somewhat atypical album on the Welsh label Bendigedig Records: “Trojan Hearse”. With a slightly different line-up consisting of Matt and Mike, Pete Mason on drums, Cris Haines on brass and Andrew Harries keyboards, they made an album about decadence and fatalism, mixed with introspective moments with on the mark pop songs like the exquisite “Breakfast Of Champions”, although darker, sadder ambiances prevailed.

In 2010, two more great works came out, back with Radio Khartoum. “How The Fallen Are Mighty” came from a state of maximum inspiration. Yes, there are a few songs that sound closer to THE BRILLIANT CORNERS or THE LUCKSMITHS, but this time they put more of their own style into it. “Delores” sounds as if the BEACH BOYS were singing over a YAZOO base. “One More Notch On The Bedpost” is a bizarre, eccentric, delightful tale. “The Help” puts all the group’s cinematographic capacity out there. “Save Your Stories For The Police, Maurice” is an exercise in funk-soul that would be a marvelous addition on any “Starsky & Hutch” soundtrack, and is in uncharted territory from any indie pop style manual... There is even some kraut on “Man Missing”. Eclectic and sparkling.

But seven more years would pass (which just confirms how unexpected and irregular THE HEPBURNS’ career is) for the next album to arrive, with the eloquent title: “There's No Such Things As The Hepburns”. Despite the wait, the band’s line-up remained stable, with the reappearance of Pete Mason. Matt Jones himself said that the album is concerned with "... personification and dehumanization, the opposite extremes of the modern human condition as capitalism exerts a stranglehold and wrings the last drop of humanity from us, people merged with animals, people merged with machines, machine-people merged with each other...". Melancholy is once again the protagonist and floods a work full of resignation that the Bach-esque trumpets do not stop illuminating.

That same year they released "Confusin' Myself with Rock 'n' Roll", on Bandcamp. It is a cover of the Norwegian singer Frode Fivel, who they toured Norway and Sweden with in 2007. And the digital activity continued with “Totter”, a five-song EP recorded in 1989 for one of the famous John Peel sessions.

In 2018, “In The Mean Time” came out; it was the last album released to date with Radio Khartoum. The colors of the album cover right away led us to different sensations than the other albums had evoked, and these are the ones that stood out significantly against what we had seen on previous releases. As Matt explains: “It all comes down to anger. The new HEPBURNS album is also given to joy, humor, and deep reverence for life’s in-between moments – but its heart is full of rage. Against the prejudice which fostered Brexit and Trump, yes; against the plutocrats pulling the strings, yes; but above all against the fact that, mean as these times are, one day we will have to leave it all behind”. This album includes the reappearance of Les Mun (it is dedicated to Pat Grover because sadly he passed away shortly before the album was released) and is arranged around the line-up that they still have now, with Sue Reece on flute. The musical references go back to easy listening from the late 60s and early 70s (Alan Hawkshaw, Bert Kaempfert), to film and television themes (Ronnie Hazlehurst, Roy Budd) interpreted by a British guitar-pop band from the late 80s.

And the group’s creative impulse is not stopping. In 2020, they self-released an album based on stories of the people from Llanelli, the place where they were born. “Electric Lliedi Land” is their most cinematographic work, as it is the soundtrack that accompanies the stories told by the protagonists themselves, whose songs are named after each of them. They are alternated between trademark pop hits like “Dandruff”, “Sneaking In The Classic”, “Grandad's Ghost” and “You Should Have Seen The Band”.

In 2021 they will release “Architecture Of The Ages” on Elefant Records, with the vocal collaboration of Estella Rosa (the singer for NAH and SAPHIRE & STEEL). It is an especially luminous album, full of California sunshine pop, where the leading role of the Bacharach-style harmonies predominate, and the group develops a collection of arrangements and melodies to brighten your day, with the finishing touch of the Dutch singers’ sweet voice.