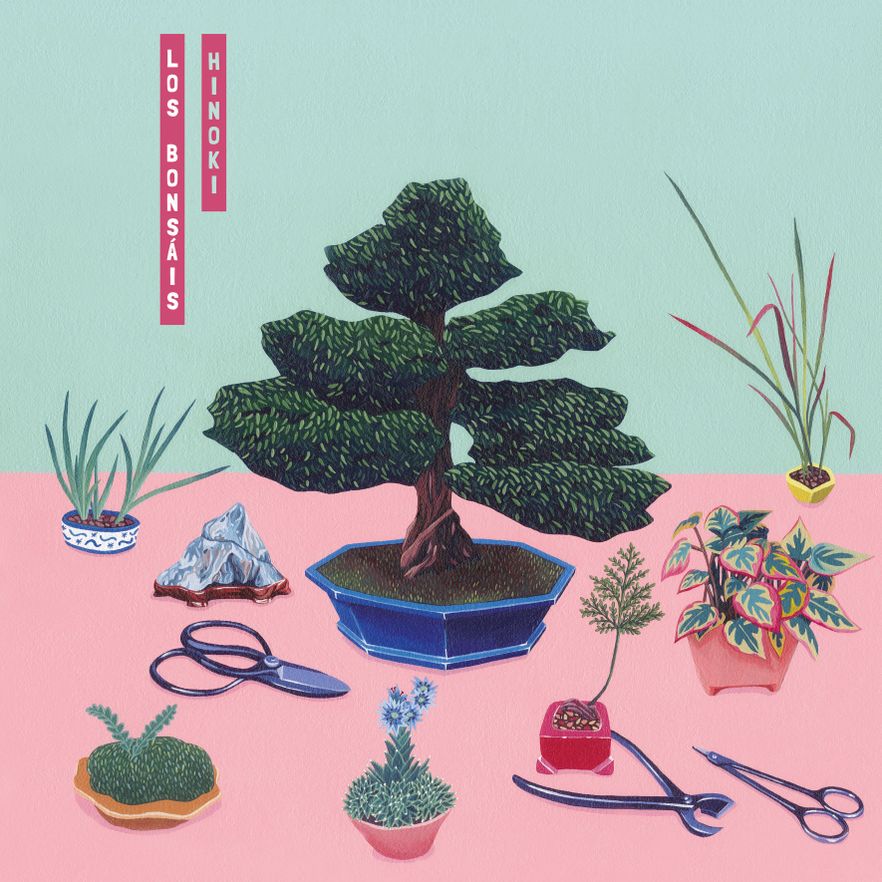 After several Singles and two Mini-LP’s; after their songs have crossed most of the world’s oceans, after having performed in festivals like Popfest in New York and Indietracks in England, and after almost four years of silence since “Nordeste”, their last Mini-LP, we finally have a new release which is also, as strange as it might sound after six years of activity, LOS BONSÁIS’ first album.

Maybe the title, “Hinoki”, is not a coincidence. The Hinoki is a type of Japanese cypress that grows very slowly, but can grow to be more than 25 meters tall, and whose wood is used primarily to build palaces. Is this a call for patience? To not rush things and do things slowly but with conviction? Either way, there is no doubt that “Hinoki” sounds less urgent than its antecedents, although that does not make it any less agile or addictive. Maturity? Yes and no. Because Helena and Nel’s songs continue to make us feel young and rebellious, full of energy and vitality. But at the same time, they show traces of something that only time can reveal.

Yes, there is fresh, fun indie pop like “¡No Quiero Salir!” (which finds interesting parallels with the surfy “Septiembre”), but above all on the first part of the album, even that reformulated “Nubes Y Claros”, they talk about taking things slowly, contemplating your surroundings. Even that acoustic take that is “No Es Para Tanto” makes us think of NOSOTRÄSH and their album “Popemas”, and above all of LE MANS and the way these groups turned the mundane into poetry. Significant echoes of this also appear on that uninterrupted luxury (or not), “La Travesía”.

“Buena Idea” seems to take a different angle, with a touch of noise and one of those bass lines that gets into your head and doesn’t let go. But the musical idea is consistent: pure and clear melodies, simple and natural arrangements, close and appealing songs, with small brushes of shoegaze, without being ostentatious but with the clear pretention of getting close to the listener with warmth and affection. This is confirmed with “Algo Extraño”, “Sin Avisar” and “Presentimiento”, where once again the bass takes a lead role, melodically speaking. “Galaxia” closes this 11-song collection that will be released on magenta-colored vinyl, as a 500-copy numbered-limited edition, with a message that leaves the journey through indecision and patience open (something that somehow confirms this contemplative attitude as a lifestyle) and echoes, as strange as it sounds, of GALAXIE 500. Delicious.

This is one of those albums that is built with transparent fibers, that traces a direct line to the listener, that runs from artistic alibis and that, ultimately, only offers something that should be a slogan nowadays. The music is a form of communication and a way of making connections. There’s too much whispering down the lane. And it’s really wonderful when you realize that a group is asking you to listen.

And for the cherry on top of all this beauty, Helena is giving us a wonderful new cover that shows off, as with previous albums, all her talent and good taste as a visual artist.