Helen Love: We Are All The Lo-Fi Kids

Helen Love have a long history since the early nineties, what we most love of these Welsh girls is that they have preserved the very essence of lo-fi for over two decades.

They are authentic party lovers, with a bit of that British punk attitude. We could resume their music in just one sentence: Sticky as a chewing- gum stuck on the sole of a Converse. If you listen their latest album we are sure you will come to mind flashbacks of the time at school.... yes ... of when you missed those classes with your friends while talking about that guy/girl you were in love.... come on don’t tell us that you never missed a class, 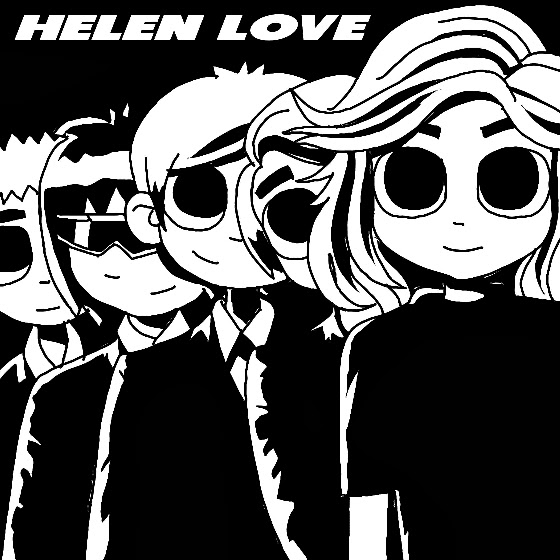 It is always good self-describing  ... what is Helen Love? Helen love is me Helen Love, Sheena Love guitar and Ricardo Autobahn electronic wizard.

Do you think in the guys who are cool first and then you compose the songs? What is the songwriting process that you girls usually do? Well obviously Joey Ramone was and still is the coolest so writing songs about him was easy. Now I think we write more stories, happy but with a bittersweet twist.

Have you ever had the feeling that your music does not belong to this century? Well most critics say our music should not belong at all, but we don't listen to those idiots, I have no idea where our music belongs.

Your last two albums have been released by Elefant Records, one of the Spanish independent record labels that has had the greatest presence in the national and internacional music panorama. You girls are Welsh.... How and when did this Hispanic-British love begin? We got told that elefant really liked us so it was natural to be on their label as we always loved the records they released, plus they are wonderful people and true music fans.

With the release of your last album "Helen Love- Day- Glo Dreams" also available here in Spain, you did a contest somewhat original: The prize for this contest consisted of a song recorded by you dedicated to the winner. How do you come up with that idea? Yes that is a great idea, we should do that! (FANS HISTÉRICAS QUOTE: We think she doesn’t know anything at all about this contest, but the Info is on-line… Helen Love contest)

At whom would you throw a Hello Kitty knickers and why?  Well today it would be The Lovely Eggs.

On November 4th you have a gig in London, maybe we can go, but if we cannot go...Have you plans about touring? Important question: Will you gig in Spain? Yes we want to come to Spain, yes we will come, next year.

Have you ever dreamed of running away with a guy at school age like happens in the video of your single “Atomic”? Or maybe you did. Ha, oh no, but I am sure everyone has gone out with someone who their parents did not approve off; it’s part of growing up.