EGGPLANT was a trio from South London formed by two girls and a boy; despite their short life as a band they managed to get largely renown on the international indie-pop circuit. Their singles passed from one hand to another as if they were precious treasures, fanzines from all over the world surrender at them. They released singles in the coolest indie labels around, like Bus Stop (“Sweet Anarchy” and “Girl Wants A Dinosaur”), Pop Narcotic (“Because Some Things Are Meant To Be Thrown Away”) and, yes, Elefant: “Crushed By Ale”. 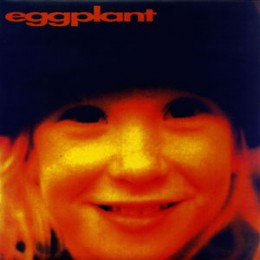 We were lucky enough as to release the band’s only album, “Catboy/Catgirl”, which brought them comparisons with HEAVENLY, SHOP ASSISTANTS, TIGER TRAP, VELOCITY GIRL or THE GO-GO’s. There’s something curious about this record: both formats bear different name and cover; the LP is called “Catboy”, whilst the CD is called “Catgirl”, and the cover art of each reflects appropriately this diversity. The outcome, the same on both formats, features fifteen encouraging pills of catchiest fuzz-pop; direct, immediate and short, very short teenage hymns, that have been suitably defined as “a moving cross between HEAVENLY, THE FASTBACKS and MAMBO TAXI”.

Guitars are simple though effective, enhancing the sweetness in Julie’s voice, always wrapped by charming backing vocals, calling up the best moments of ELASTICA and THE PRIMITIVES. As it should be, being a good punk-indie-pop band, only two songs last more than two minutes. None the less one of the songs, the album closer, is a heartfelt mid-tempo which moves away from the rest of the album when showing EGGPLANT’s mature, reflexive side, where the neat guitar arrangements contrast with the previous songs’ urgency and teen angst.