“Porque lo viejo es lo nuevo, y lo culto, popular” (Because what’s old is new and what’s cult, popular). That’s how ASTRUD’s latest disc begins, accompanied by COL·LECTIU BROSSA and produced by Ferran Conangla. They are breaking down barriers, disconcerting and ironic as always, brilliant, creative and unprecedented like never before. Because this album, like all compilations (although this one really isn’t once you hear it), serves as a point of inflection: it’s a moment to reconsider, reset, rethink and reflect based on the past, present and future constants which, in our case, give weight to one of the most astonishing, personal and unique musical careers in the history of Spanish pop.

But, who are ASTRUD? Obviously, looking back means seeing the trajectory of a group that appeared before us as a reconstruction of techno-pop when they released their sold-out and highly searched for debut EP. They surpassed all our expectations with albums full of great choruses and generational anthems like “Mi fracaso personal” and “Gran Fuerza”. They definitively confirmed their success with “Performance” and “Tú no existes”. People tried to define them by referencing groups like THE MAGNETIC FIELDS and MOMUS, and styles like Euro dance, folk-pop, chanson and Italian disco, but whose original sound, mixed acoustic instrumentation, with programming and danceable beats, left even the most incisive journalists out of sorts.

And currently, if the video for “La música de las supercuerdas” opened the heart and mind of Manolo y Genís, and offered us an abstract, hysterical, absurd, but at the same time incisive and captivating perspective of what ASTRUD’s universe is like, this new disc is the achievement of all of this. And, with the exception of two new pieces, the already known “La música de las supercuerdas” that closes the disc, and “Lo popular”, which opens it, the rest of the tracks are reinterpretations of those songs that have been basic in their career and that have been so highly praised: “Esto debería acabarse aquí”, “La boda”, “Miedo a la muerte estilo imperio”, “Minusvalía”, “Cambio de idea”, “Noam Chomsky” and many more, are reformulated from an almost concrete perspective, feeding on the more slippery moments of classical music, and all thanks to the priceless role of COL·LECTIU BROSSA, who, with instruments like the violin, the cello, the vibraphone, the accordion and the wheel-fiddle, have created a private musical language with Manolo’s lyrics and Genís' synthesizer. The effect is truly incredible, original and impressive… The songs maintain their immediacy and aim within much more complex forms and difficult structures. As if SOLERA used Erik Satie for arrangements. As if Ravel covered SAINT ETIENNE. As if the legendary MUSICA DISPERSA or PEP LAGUARDA i TAPINERIA played an homage to LE MANS. Anyone who loved the songs when they were released will no doubt be impressed by the renaissance of all of these compositions that marked our days when they were played in the clubs.

No, we already told you that this was no ordinary compilation. Albums that recover the most successful moments of the group’s career are for closing an era. “Lo nuevo” without a doubt, is opening a new one, promised by that brilliant and unrepeatable dialogue that closes the short-film/video clip for “La música de las supercuerdas”, and that is summarized in this sentence taken, again, from “Lo popular”: “There is a game of preconceptions and reflections / and I want to be the mirror, and I want to reflect / there’s a secret thread, so fine it’s invisible / I want to be the needle, and I want to thread it.” A reconsidering of all the forms to arrive at a game of mirrors full of hiding places and discoveries. There aren’t words.

Unpredictable and unexpected, ASTRUD confirm with their return that they are one of those great occurrences in Spanish pop; they are unforgettable and inimitable, and totally unclassifiable. With those unique melodies, their always fresh and surprising attitude, knowing how to keep themselves equidistant from the philosophical and the absurd, the theory and the sarcasm, the truth and the lie, the beautiful and the ugly, the predictable and the groundbreaking… playing with the cards, shuffling them, but always with that elegance that makes them UNIQUE. And in case anyone doubted it, “Lo nuevo” is here to remind us of it and rediscover it for us.

Click here to listen to the album on SPOTIFY

Click here to listen to the album on DEEZER 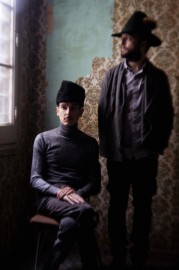