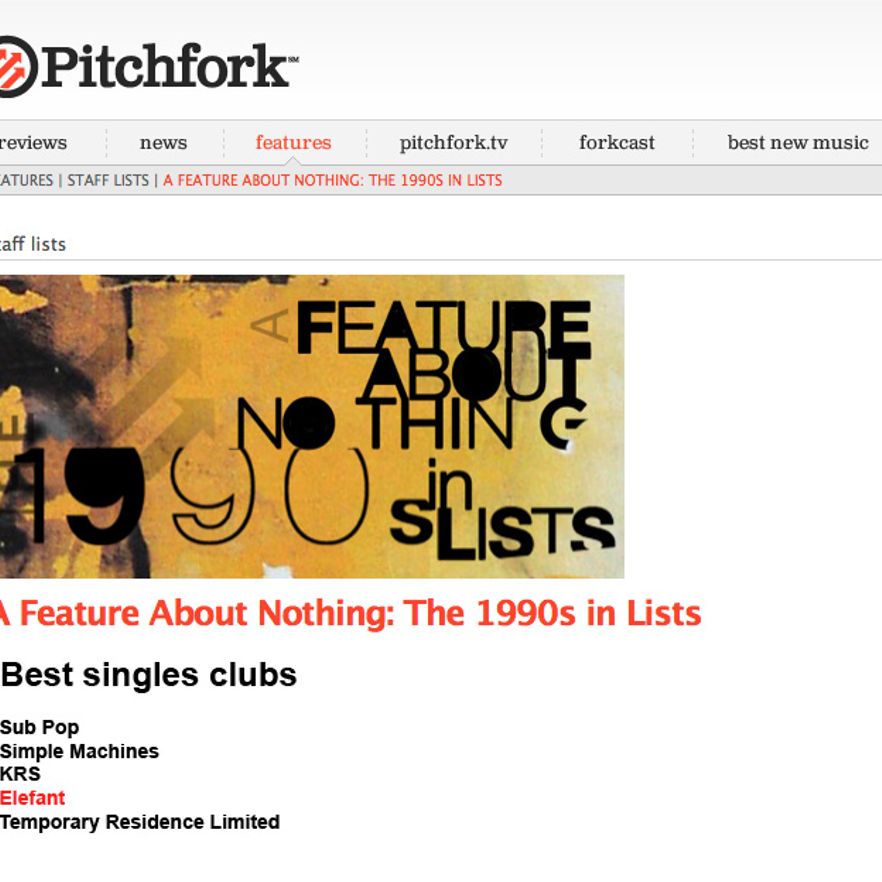 ELEFANT is listed among the top five “Single Clubs” of the decade by the American blog Pitchfork, which is one of the leading sources of information for independent music fans.

Elefant Record’s disappeared Club del Single released, from 1996 to 2001, a total of 69 vinyl singles from some of the most important artists of the international indie scene at the time – English groups, Japanese, Spanish, French, Argentine, German, Australian, American, Chinese and Swedish groups all formed a part of our select Club del Single and they gave us exclusive songs on glorious 7-inch vinyl that all of our Club del Single members were able to enjoy. Artists like JACK, LE MANS, MAGOO, QUICKSPACE, THE CLIENTELE, FUGU, Ana D, BMX BANDITS, LAMBCHOP, FRANK BLAKE (a project from TEENAGE FANCLUB’s Norman Blake and BMX BANDIT’s Francis Macdonald), THE FRANK AND WALTERS, ISAN, THE LADYBUG TRANSISTOR, ST CHRISTOPHER, GONZALES, Ally Kerr, CRANES, SING SING (Emma Anderson’s project after LUSH), VACACIONES, IBON ERRAZKIN, SR CHINARRO and LOS FRESONES REBELDES among many others, took part in this adventure that fought to maintain as special a format as the vinyl single, a format that had given so many good moments to the history of music ever since the 50’s, and that in the 90’s had found itself totally cornered by the CD, and even seemed like the vinyl single’s days were numbered.

Being on the best Single Clubs list gives us a ton of energy, especially since it coincides with the recent birth of “New Adventures in Pop”, a new collection that is going to bring back a little of the spirit of our adored Single Club an the passion we feel for vinyl singles.

The first two releases for “New Adventures in Pop”, PAPA TOPO and GUATAFÁN, sold out in just a few weeks. The next release will be singles from BAND À PART, ZIPPER and ONWARD CHARIOTS, which will be released this coming October.

LINK to the article at Pitchfork