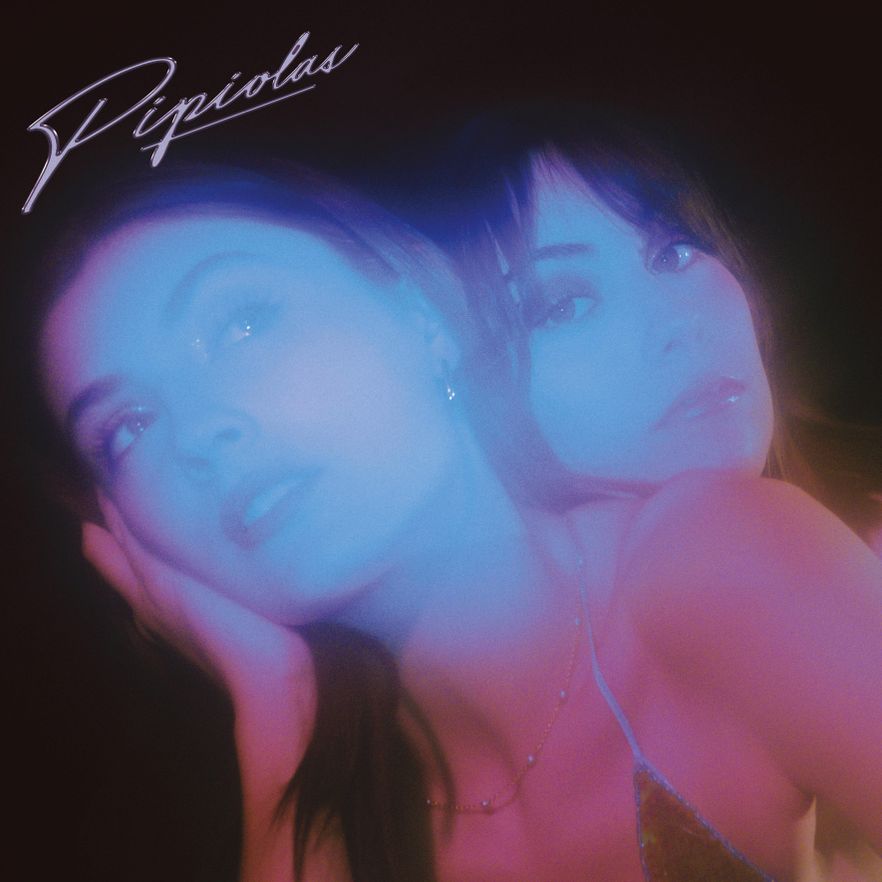 Those of you who are regular followers probably figured this was coming. A vinyl was imminent. And here it is – the debut from PIPIOLAS in 10” Maxi-Single format, as part of our “New Adventures In Pop” collection, which includes a list of names to date that makes your head spin, like PAPA TOPO, TRONCO, LISASINSON, CARIÑO, AXOLOTES MEXICANOS, PUTOCHINOMARICÓN, MARINITA PRECARIA or AIKO EL GRUPO. Because everything that Paula and Adriana have been giving us these last few months just had to go on a vinyl like this, with that cover that shows an incredible photo by Neelam Khan Vela, that logo designed by Aritz García, on a speckled, transparent vinyl with black swaths, with all the care in the world and those four indisputable hits. Because they have something special, that edgy pop, full of fantasy, where it is impossible to be bored, with great melodies and arrangements, and above all overflowing with imagination and creativity. Yes, of course, they met in the RESAD (the Royal College of the Performing Arts), where they both studied acting, and took choral and lyric singing classes. But really what defines them is their tremendous personality, charisma, and magic.

The A-side opens with “Club de los 27”. It is a complex song, full of ornamentation, but at the same time very immediate and addictive. Like a less bizarre, more punk version of “Bohemian Rhapsody”. And it begins like this: “En el club de los 27 / Ya no están todos los de siempre / Porque se ha morido la gente / Cuerpos fríos son suficientes” (In the 27 club / Not everyone is with us / Because they have died off / Cold bodies are enough). We can hear MECANO and also HOLE, SAINT ETIENNE and ALVVAYS. And they stop. And the epic-ness begins. M83. And another line for the vaults: “¿Y ahora que hacemos con la modernez? / ¿Y ahora qué hacemos con lo que mola? / ¿Y ahora qué hacemos? ¿Qué se puede hacer? / ¿Y ahora qué vamos a hacer?” (And what do we do now with modernity? / What do we do now with what seems cool? / And what do we do now? What can be done? / What are we going to do now?). It is the anthem of a generation. Enough said. The first side of the vinyl also includes “Domingo raro”. We fall in love right from the very start: “Tengo un abrigo de piel que heredé / Un vinilo de Miguel Bosé / Y un amor caducado / Tengo hecho caldo y café / Tengo un apellido sin nombre / Yo tengo los hijos sin pasaporte / Tengo un invierno borrado / Tengo prisa por volverte a ver” (I have a hand-me-down fur coat / I have a Miguel Bosé vinyl album / And a love that has expired / I have coffee and broth ready / I have a last name without a first / I have kids without passports / I have a forgotten winter / I have to see you again soon). The delicacy and sound of FAMILY and VAINICA DOBLE, the excited imagination and fun rhythms. And like “Common People”, the song explodes with euphoria while still working the same dynamic, while it draws that strange quotidian fresco, in the style inherited from Gloria Fuertes and Cecilia. An absolute anthem, marvelous, that also includes the collaboration of Bego, which is to say, Begoña Vargas, the actress known for playing Roberta in “La Otra Mirada” and Tere in “Las Leyes De La Frontera”, and who reveals herself here to be a magnificent singer. Bego is a friend of Paula and Adriana, who watched the project grow and wanted to form a little part of it. 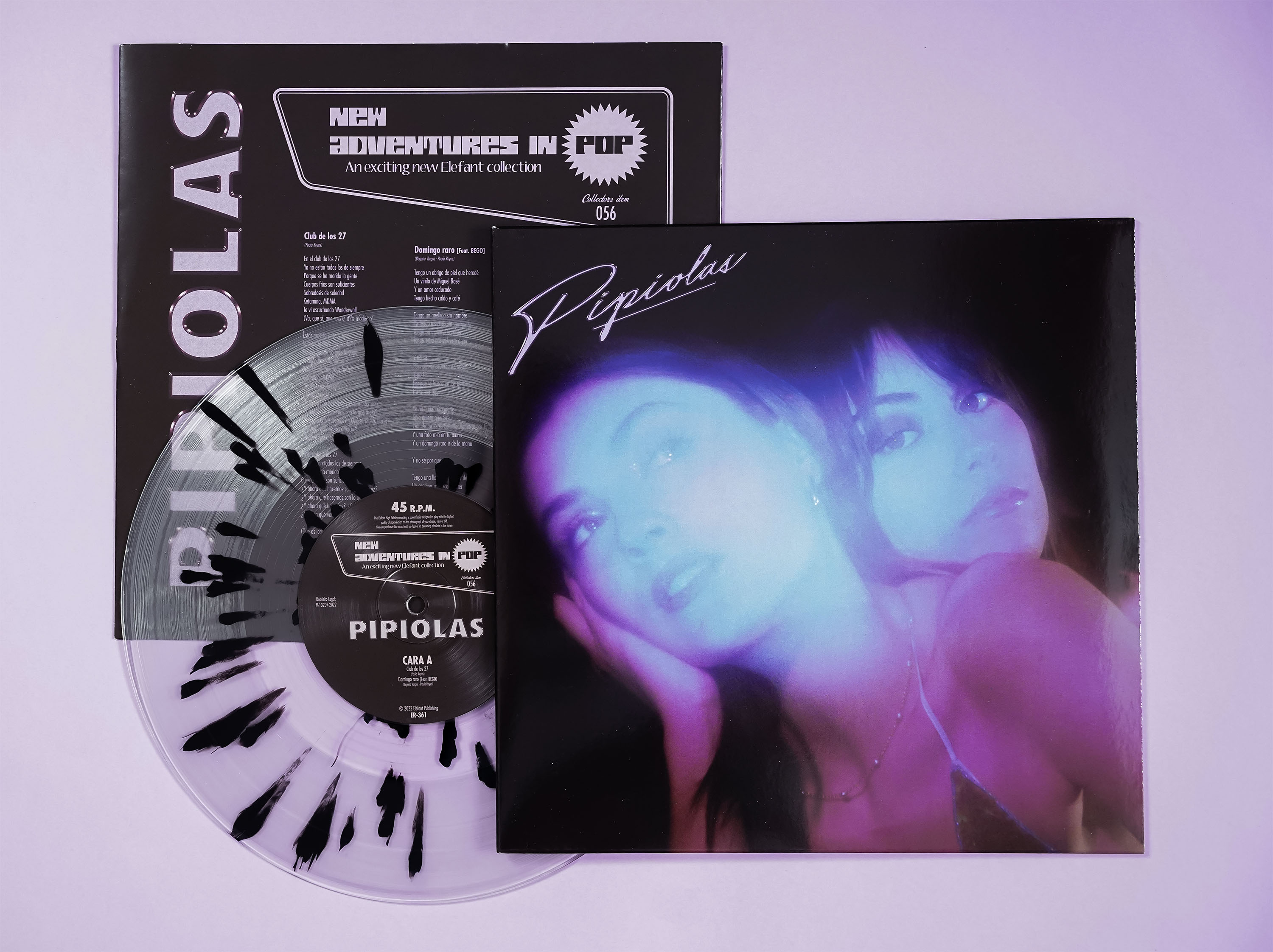 The B-side begins with the first song we ever heard from them, “Narciso”. That’s where they marked the parameters they were going to move within. They are giving us something more than music. And you know it because in barely four minutes you have gone from bedroom pop to house, then suddenly to techno-pop, and then another quick change and you’re rubbing elbows with punk-pop, after a few epic turns in the style of LA BIEN QUERIDA. It sounds amazing. And without being washed out or disjointed; without feeling like cut-paste. They know how to move through any territory, and they know it doesn’t pay off to do it half-assed. This release closes with “Un poco triste :(” and we are surprised all over again. Bedroom soul pop, melancholy, and in English. It has nothing to do with what we have heard up to now. HAZEL ENGLISH, THE SHACKS, TENNIS… Slow rhythms that contrast with the summery images. Summer memories. And almost at the end they surprise us with a few words in Spanish: “Ayer te llamé por si vas a volver / Pero tú respondiste que no” (Yesterday I called you to see if you’re coming back / But you said no). And it’s over. And you melt like ice cream in the sun.

The recording and production of Vau Boy deserves its own paragraph, with its rich instrumentation and exquisite arrangements, transgressing the marvelous and powerful bedroom pop that have melted our hearts with until now.

There is no question. They are destined to be one of the biggest things in Spanish pop in the coming years, to create great moments. So far, they have given us four huge, exciting songs to make us laugh, shout and cry. And above all to sing. No holding back. Just look at how they do it. As if their life depended on it.