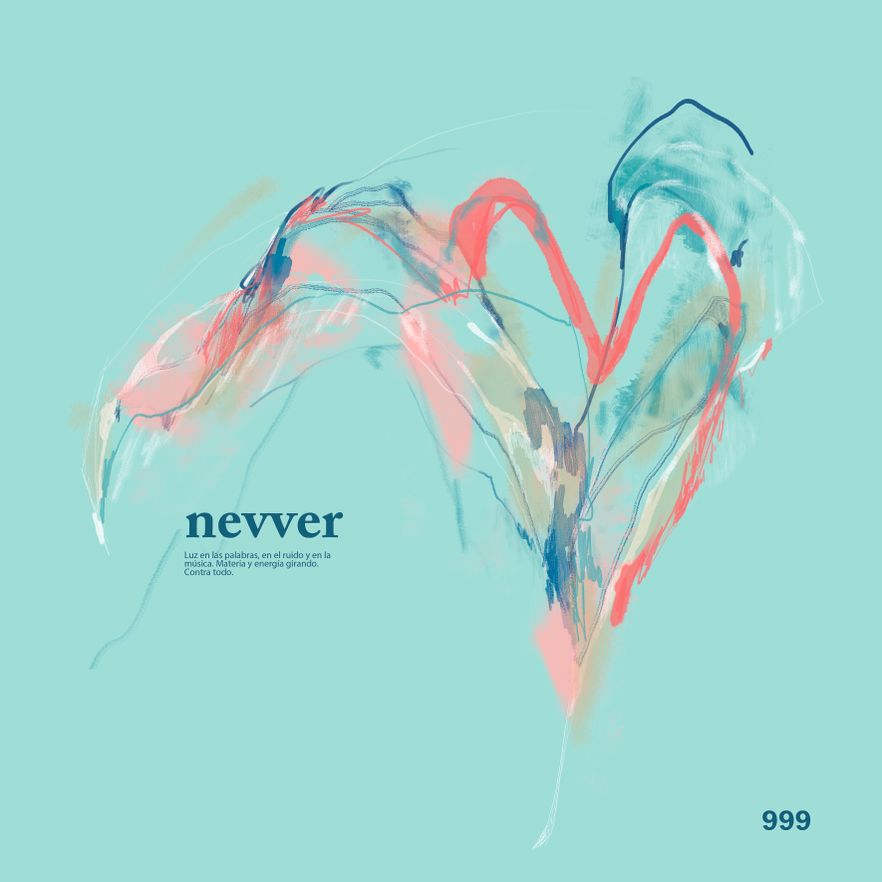 With their first Mini-LP, “Disforia”, NEVVER made the first move in 2019. Their music, mixing post-punk, shoegazing and trap, opened a world of possibilities for a sound that was almost completely unheard of at the time. The way their songs dampened the urban genre with melancholy, contained their rage and was filled with poetry (establishing an invisible connection to the great Saul Williams), established a before and after for a group that was destined to be talked about endlessly in the most specialized circles. But far from settling down with a style that was already cutting edge and with so much to offer, they take a new leap with their new album. With assistance on production from LEFTEE and RARE (from Valencia’s Toxic Pop collective), they have made their first full length, “999”, with an eye on the dance floor, blowing it up with techno-pop or even dream-house, holding on to that strange dialogue between rage and melancholy, their poetic breath, their capacity to evoke forgotten, mistreated neighborhoods. We have to ask again: have you ever heard anything like it?

And if you haven’t, listen to “Hacemos El Amor Con La Ropa Puesta”. Echoes of Detroit and Berlin. And instrumental, at that. It is a total statement of intentions, proof that they can’t be boxed in and won’t follow the beaten path. “999” was born of the pandemic and distance, and despite that sounds closer than ever. It gets close in sound to bands like THE BLAZE, ODEZENNE and Spanish groups like SEN SENRA and CHICO BLANCO. But above all, it is all about poetry. We mentioned Saul Williams a few lines ago, as one of the greatest defenders of poetry as the DNA of urban music. But here NEVVER takes it even further and conceive of this album as a tribute to the poet from the Canary Islands, Félix Francisco Casanova (1956-1976). Every title of every song is based on letters and poems from the missing writer. And that breath pulses through each second of an album that is almost too exciting to take.

“Amaneciendo Y Anocheciendo”, one of the advances from the album, has that evocative capacity so typical of the band, with those production textures that LEFTEE adds that gives luminosity to a dark moment, the return home, the wee hours of the morning, after having broken off a relationship that wasn’t working. Contrasts, nuances, emotion boiling to the surface. “Por las veces que me han hecho daño” (For the times I have been hurt). And then “Tu Boca Mordiéndome El Labio” takes that line back, repeating it like a mantra at the beginning, to trace a new obsession, a misplaced passion, in a song that opens a clear bridge to their previous work, with trap bases and just the right amount of autotune.

“Gritos De Euforia” is a multifaceted wonder. Borja’s crystalline guitars make their first appearance, the echoes, the sadness. But the powerful bases fan the flame. And Javier’s verses spread it. There is a lust for life, strength, reaffirmation after suffering, accepting pain as a part of life, the path to loving every second we are in this world. “Atrapando Olores En El Aire” goes back to the dance floor, but this time with a halo of night, mysterious, sexual: “Las ciudades se desnudan” (The cities are stripped bare). The drones hypnotize us now, they create soundscapes, capture our hearts while we dance and dance.

“Cuando La Noche Me Aprisiona” is epic. Techno, hardcore, punk, out of control intensity, sex, hangover, religion. A deafening cocktail. It is impossible to get out of there alive. “Te Veo En Cada Vaso De Agua” goes back to the more rap-based pulse, the agile, tireless rhythms, the dead city, the smoke, with a push from the collaboration with Claudio Montana, speedy, out of breath. “Siempre Triste Y Azul” might be the summary of NEVVER’s spirit. The pain and the sadness are a motor, the blue that impregnates everything, the drugs and the sex… And on the other hand, the love that makes us feel alive, that breaks through all the other things. All of this with a bass that Peter Hook would have been thrilled to write, synthesized landscapes that would have been the pride of Robert Smith, when the darkest feelings make you feel happy and full. Marvelous.

“Tiernos Maullidos Eléctricos”, the first advance from the album, reminds us a bit of THE POSTAL SERVICE. We are flying, electricity tickles every muscle of our body. And the curtain closes with “Espero Que Nos Crucemos Al Doblar Una Vida”, the depression, the destructive feelings that trap you when you go home at six in the morning. And finally, “El sol… / El sol por la mañana” (The sun... / The sun in the morning). What an incredible way to end an album like “999”.

Because we are talking about an album that is juicy in every sense of the word. Because of its painful but optimistic and dynamic message. Because of each and every word it includes. Because of the paintings it makes with sounds. Because of the stylistic play. Because of the exciting production work. And because every time we listen to it, it seems like a new album. May nothing take NEVVER away from us. We need them.