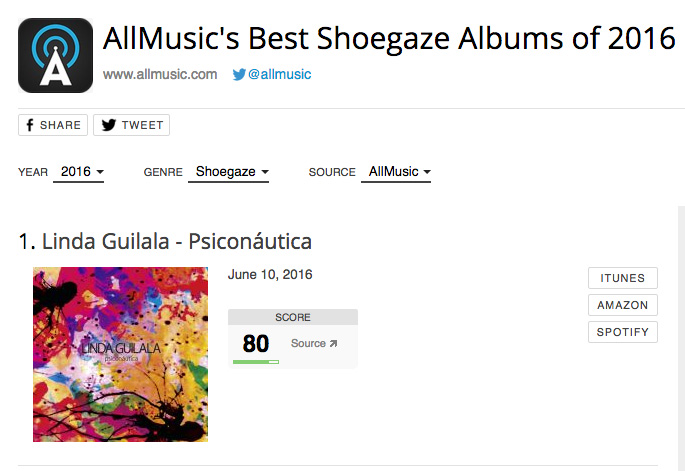 Psiconáutica is Spanish indie pop group Linda Guilala's second full-length album, but if it weren't for the two interim EPs following their 2009 debut LP, Bucles Infinitos, it might seem like the work of an entirely different band. While their first effort balanced energetic, upbeat synth pop with slightly hazy guitars, 2011's Paranormal increased the volume a bit and added supernatural-themed lyrics, tweaking their sweet sound into something a little more spooky. Arriving in 2014, Xeristar featured a much more intense, noisy sound courtesy of new guitarist Bruno Mosquera, which brings us to 2016's magnificent, sprawling Psiconáutica. The group embraces experimentation more than ever before, building dense, mutating walls of sound through a plethora of guitar effects and synthesizer tones. At 20 cuts, the track list seems staggering, but half of them are interludes that smoothly flow and connect the songs. Many of these interstitial tracks seem like intros or continuations of the preceding tunes, and you get the impression that other bands might just try to fold these into the main songs rather than dividing them into separate tracks. Ultimately, this is an album clearly meant to be consumed as a whole work. Having said that, it still has an abundance of incredibly catchy songs, proving that Linda Guilala haven't lost their love for pop. What's much different here is that instead of being spunky or peppy like their older material, these songs are far more moody and introverted, even sad. With two songs titled "Fobia Social," it's clear that they're expressing serious loneliness and alienation, and the downcast tone of the melodies and vocals reflects this deep sense of melancholy. The group effortlessly blends breeziness and intense storms of emotion, resulting in an exhilarating whirlwind. Heartbreaking and sometimes overwhelming, Psiconáutica is a great album for almost an entirely different reason than Linda Guilala's debut was.