The group is formed in Austin, Texas in summer 2005, thanks to a Myspace bulletin put out by Veronica Ortuño in which she sought people to form an American 60’s girl band. The result?, four people from diverse musical backgrounds. Erin Budd and Verónica were part of a rock n’ roll band which followed in the footsteps of BIKINI KILL, called FINALLY PUNK. Chris Lyons put out records (and still does) on K Records, Kill Rock Stars and Lookout! under the alias Gene Defcon, and simultaneously, found time to dedicate efforts to an electro-punk band, THE PRIMA DONNAS and the curious THE OLD-TIMERZ, a group that Chef, another one of the selected few played in. On top of being in this group, Chef also took part in playing concerts in small libraries in a children’s band, THE TELEPHONE COMPANY. Their principle objectives would be to put together a response to the uniform music scene in Austin, where dance and indie rock bands dominated. 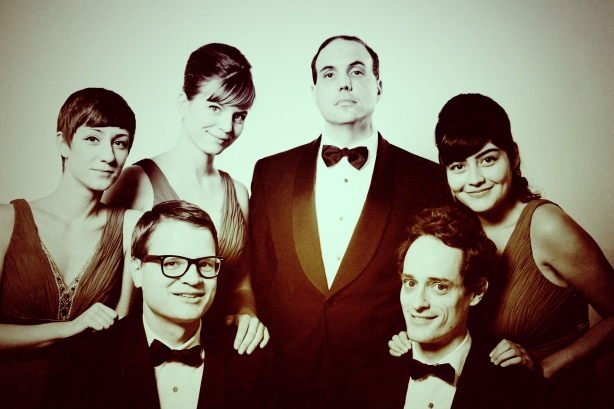 After the first practice, they saw the need to strengthen their sound and that is when Jennifer Moore (she participated in almost all of the recordings of VOXTROT, as well as some of their shows, with her delicious voice) and Stephanie Chan (she also played with Erin and Verónica in FINALLY PUNK).

They started playing gigs throughout Austin with a repertoire basically consisting of covers of THE RONETTES (never forgetting to perform “The Best Part of Breaking Up” and “Remember”), THE SUPREMES and THE COOKIES, among others. The crowds in Austin were mesmerized because they were not used to this type of sound. It was only a matter of time when The Austin Chronicle and The Daily Texan started to sing their praises, recognizing their great sense of humour, their ability to have fun, their sixties wear and their fantastic melodies.

While FINALLY PUNK received applauses from people like Tobi Vail (drummer of BIKINI KILL) and Karen O from YEAH YEAH YEAHS, THE CARROTS began to gain national fame after their performance on March 15th in the prestigious festival South by Southwest (SXSW) in Austin, sharing the stage with diverse acts such as Beth Orton, Kris Kristofferson, WHY?, Jose Gonzalez, OF MONTREAL, Mary Lou Lord and many others. This performance, with strong influences of the British band, BOY KILLS BOY, allowed their music to soar through the ocean, cultivating an interesting fan base on the other side of the Atlantic. From that point on, instead of using their real names, they used pseudonyms: Prude, Rude, Tude, Crude, Nude and Lewd. Having fun was just only one of the group’s principal objectives.

That summer, their first demo was released for free online via Myspace, which included recordings made in small home studios such as the first covers of “Secret Since’99,” “Jimmy Don’t Cry” and “Beverly;” The music of THE CARROTS reached the ears of Elefant and they end up signing them onto the label by the end of the year.

After various concerts and their second performance in the festival South by Southwest (SXSW), they finally started recording the eight songs which would comprise their two singles. Eric Wofford produced these delicious songs at Cacophony Studios, a very unique recording studio in east Austin, on the shore of the Colorado River, where people such as Bill Callahan, THE EARLY TAPES, EXPLOSIONS IN THE SKY, FRIENDS OF DEAN MARTINEZ, MY MORNING JACKET, OKKERVIL RIVER, SHEARWATER and VOXTROT recorded. Throughout the months of April and May, the first recording phase would finish, due to the THE CARROTS’ tight schedule and previously planned concerts and tours with their side projects.

Shelley McKann and Lace Durant became part of the band.

They returned to the studios in November to finish where they left off their recordings before the summer at Cacophony Studios and by the end of December, Eric Wofford completes the mixing and the production of the eight songs.

On March 12th, the group returned to the festival South by Southwest (SXSW), along with groups such as THE LEMONHEADS, SATURDAY LOOKS GOOD TO ME, THE KILLS and Paul Kelly, just to name a few.

Throughout the months of May and June, they toured the U.S. with over forty concerts from coast to coast of the North American country, performing songs from their debut single “Doing Our Part” released at the end of May. This limited, special edition vinyl of only 1,000 pressings includes four splendid songs, “Doing our part” and “Jimmy don’t cry” on the A side and “Secret Since’99” and “Ladies of Givens” on the B side.

The first issue of the official Fan Club of THE CARROTS is published and available at concerts for followers of their tour.

At the end of June, their second single, “Beverly” will be released in a limited, special edition vinyl, like their debut one, with four songs, “Beverly” and “Kissing and Telling” on the A side and “I Tried to Call You” and “Gloria” on the B side. Both singles will be available on iTunes and other musical digital stores.

Five years ago, they left us longing for so many more songs, with those incredible, fun singles, “Doing Our Part” and “Beverly” (which were put together for a an exclusive-edition CD in Japan). Since then we haven’t heard a lot about THE CARROTS, who have been busy with the countless parallel projects they’ve put together. But suddenly, they’ve finally finished everything up and their first full length, “New Romance”, is here. And with it, the Austin sextet is back to show us their special way of understanding “girl groups” through great songs and marvelous arrangements.

With a line-up solidified by Jason 'Chef' Pittman,Veronica Ortuno, Chris Lyons,Jason Pearson,Shelley McKann and Rose Russo, this album is fresh, with Veronica Ortuno’s versatile voice, capable of carrying songs from the sweetness of Diana Ross to the strength of Dionne Warwick. These past years of waiting have not been in vain, the group has increased their audience in the States, appearing in the media, touring all over the country, playing in some of the most prestigious clubs and bars in their city, like The Continental Club and Antone’s. They’ve played in SXSW, opened for Calvin Johnson (BEAT HAPPENING, K Records), and above all they’ve been preparing a practically perfect collection of songs that remind us how much we like THE RONNETTES, THE VELVETTES, SHANGRI-LA’s, THE MARVELETTES, and THE CRYSTALS, and they link them with contemporary artists like THE SCHOOL, GIGI, THE BANDANA SPLITS and THE YEARNING.

We have proof of this in “Baby, You Don’t Know,” the album’s first track, which puts the cards on the table right away: playful choruses and perfect pop melodies, but this time working with the efficiency of a tighter and rawer instrumentation, without strings or winds, letting the majority of the weight fall on the vocals. That’s why songs like “You Can’t Promise” stand out with their more soul-styled spirit, somewhere between an early Marvin Gaye and a Martha Reeves in all her glory. Patiently, letting the excitement slip back into Veronica and Shelly’s soft inflections, songs like “Roping Me In” and “Sault St. Marie” softly caress us.  “New Romance,” the album’s title track, lets the rhythm & blues spirit tear loose, and is one of the biggest surprises on the album, with echoes of Arthur Conley and Rufus Thomas. “Crystal Lake” is absolutely fantastic, with lyrics about youth, love, infidelity, jealousy… It’s repeated again and again throughout the album, but always situating the love stories in the golden age, when young people began to reveal themselves and decided that love, fun and music were the most important things in life. “Moment in Time” has that free but deeply melodic spirit of HERMAN DÜNE’s best pop songs and BELLE AND SEBASTIAN’s sweetness, with phrasing that is both so open and at the same time so tremendously catchy. And we couldn’t leave their first two singles out; the delicious and contagious “Doing Our Part” and a different version of their perfect teenage anthem, “Beverly.” The album closes with a surprising “Baby’s Unborn,” a delicious piece of minimalism, with scarce guitars, tambourines, and vocals. Because of or in spite of this, it’s probably one of the most beautiful songs on the album, with celestial harmonies and lyrics that wrap the song up in a play on words.

It’s a highly comforting album that flees from the stereotypes and tricks of the style to stand up tall and proud with its own personality and momentum. It was definitely, definitely, worth the wait.