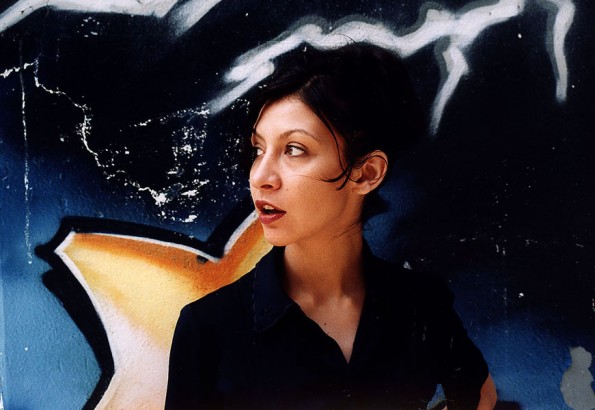 Paris, a sunny sunday morning, April 1993. They were sitting outside a cafe, smoking cigarettes and arguing about perfect clothes and tasty wines, strange movies and acceptable sounds. They were thinking of great pop trios, from THE SUPREMES to CODEINE, from Godard’s “Band Of Outsiders” to THE JAM, from “Forever Changes” to “Some Velvet Morning” or “The Blow Up”. Above all, they all came to smile when someone mentioned FELT. For all of three, the best band ever, The ultimate pop genius. Anyway, by this point, Alex, Daniel and Jean-Baptiste knew they had to join their talents.

Alex was born in Madrid and lived for some time in London before she moved to Paris. She has big green eyes, dark hair and perfect lips. She loves Laura Nyro, Dusty Springfield and MOOSE, she thinks Mark E. Smith is a genius and Lawrence (from FELT/DENIM) is God. She sings and writes the lyrics.

So the band was formed, and the name chosen was SPRING (taking it from an old Blue Note jazz record). One week later they held their first gig ever in the French capital: they played three songs and left the stage. Someone said they were the new VELVETS. Strange, since they just wanted to sound as the new FELT. Shortly after that they recorded an instrumental theme which they sent to Bob Stanley, and SAINT ETIENNE’s leader thought that “Bob Cool”, the song, was good enough as to be included on his label’s compilation, “We Are Icerink”. But before this important step on their musical career, SPRING had already supported MOOSE and THE DIVINE COMEDY in Paris (they would later play the support act for PULP and LUSH as well).

They all went to London, just to prove how punk could a semiacoustic band sound, and on those gigs they realized they needed someone else. So Christophe appeared into the scene, a funny guy who had already played with other bands and, even though it can sound weird, he had never heard of some Maurice Deebank before playing with SPRING. He loves English sixties pop and psychedelia. He plays electric guitar and writes some music as well.

So now they were four: walking, drinking “pastis” and thinking about songs, arrangements and shows. But nothing is easy, and Daniel leaves the band to become the manager of DARLIN’ (better known later as DAFT PUNK). Afterwards François, a young man who’s always happy, came to play bass in the band. He works as a fashion and costumes designer in Paris, he likes Gainsbourg and the bands from 4AD. His friends say he looks like Marlon Brando; the young Marlon Brando, of course.

Before Christophe and François were a part of the band, they had already recorded the three songs included on their debut EP “Something Beginning” (incidentally, some Thomas DAFT PUNK Bangalter played keyboards and engineered in this record), described as a pastoral mixture between FELT and Françoise Hardy, which showed too well their renown elegance and savoir faire. Elefant Records was the label to take it out, and is still releasing their records with pride.

Next step meant to go back to London, this time to work during eight days with producer Brian O’Shaughnessy, who had worked to this date with Peter Astor (THE WEATHER PROPHETS), MY BLOODY VALENTINE or the largely subvalued MOOSE. They took the name for what would be their debut album from a weird Japanese gangsters film from the sixties, which has had a very important influence on Quentin Tarantino’s subsequent work: “Tokyo Drifter”, seven new songs, a cover version of Françoise Hardy and a duet with MOOSE’s Kevin McKillop. Shortly before they had released a happy experiment, the first release on new label Stereophonic Elefant Dance Recordings: a collaboration with French electronic avant-garde geniuses EXTRA LUCID and INDURAIN, on the CD-single “Be My Star”, where trip-hop and pop join their ways naturally, in a dreamy and danceable way.

But their activity in 1995 wasn´t only dedicated to write and release their own splendid creations, but the band’s members diversified their talents in fruitful collaborations: Alex brings her voice to the song “Regulo 7”, on MOOSE’s album “Live A Little, Love A Lot”; Jean-Baptiste sings some backing vocals on STEREOLAB’s album “Mars Audiac Quintet”; and Michelle plays piano on HERZFELD (ex-McCARTHY) mini-album.

In 1996, SPRING honoured with their class and good taste Elefant Records’ Singles Club, and they did it with a very special little jewel for its members: a pink vinyl seven incher, featuring three Spanish eighties pop classics. “Hansel Y Gretel” by GOLPES BAJOS, “Tan Lejos” by DECIMA VICTIMA and “No Sé Por Qué” by ALASKA Y LOS PEGAMOIDES, suitably named “Chante En Espagnol”, as those dearly loved EP’s from the sixties. It’s not a surprise that some pop passionate Parisians know and love Spanish music, and the prove is their subsequent CD-single, “Matinées”. After having released their album in Japan with good response, they released this new record with a title song taken from “Tokyo Drifter”, three unreleased songs and a new cover of a Spanish band: “Como Un Aviador”, by FAMILY, showing once again their faultless good taste (just check the delicious artwork on all their sleeves, by Magic Design/4UMAN).

Their friendship with the members of LE MANS helped them to meet Spanish DJ Javi Pez (from Spanish label Novophonic), with whom they have collaborated in a 10”/mini-CD, “Out Of Time”, which showed quite well the way they were going to follow on their new LP, just released, “The Last Goodbye”: exuberant arrangements, brass and percussions, samba and bossanova, but never leaving aside their charmingly relaxed, acoustic pop. But before, German label Bungalow released “Spring and Friends”, a compilation featuring the complete sessions with Pez, plus some songs from the “Be My Star” CD-single and a cover of SHAMPOO’s “Blisters And Bruises”, which was also put out in Japan via Tokuma and got them a lot of press and radio play in the UK and Germany, where the band also played a couple of succesful gigs with MOMUS. They even sang together a cover version of Jacques Brel´s classic “Ne Me Quittes Pas”. By the way, Tokuma Japan had also released “Tokyo Drifter”, and such prestigious labels as L´Appareil or Escalator released compilations including SPRING songs.

In between all this buzz, the band suffered some difficult moments when Jean-Baptiste left, just after the recording of the new album. Nevertherless, with a new line-up based on the initial threesome (Christophe, François and gorgeous Alex) plus different additional musicians, played at the Alternative Eurovision Contest Eurobaschh 98, broadcasted in the UK via Channel Four. The jury was formed by such personalities as SOUL 2 SOUL’s Jazzie B or Ultra Naté, and despite they didn´t win, their live rendition of “Chuck It Up!” conquered many hearts. After that they presented their new songs live in a London show, as well as in a festival in Brighton along with such bands as BROADCAST, BIS, HIGH LLAMAS, TURN ON, BUFFALO DAUGHTER, MAGOO or PLONE. Their appearance at this festival was acclaimed with some enthusiastic reviews in the UK press; the same happened with the Bungalow compilation : magazines like Mojo, Mixmag, Muzik showed its admiration for the album, specially for “Chuck It Up!”, also released as a single; Melody Maker interviewed Alex; Miles Ahead placed her face on the cover.

SPRING ended 1998 by doing their longest Spanish tour yet, plus some club dates in France and a Rockomotives Festival appearance, with such bands as DAMON AND NAOMI or POOKA in the bill, coinciding with Wagram Music´s release of “Soft &Easy”, a compilation also featuring CZERKINKSY, FANTASTIC PLASTIC MACHINE, JAY JAY JOHANSON or COMBUSTIBLE EDISON among many others. They also recorded a show for Spanish TV Channel 2.

Meanwhile “The last goodbye” was licenced to other labels in the world -JVC Victor released it in Japan in 1999, and March did the same in USA in 2000- SPRING started a long hiatus that has finished with the confirmation of the band’s split.