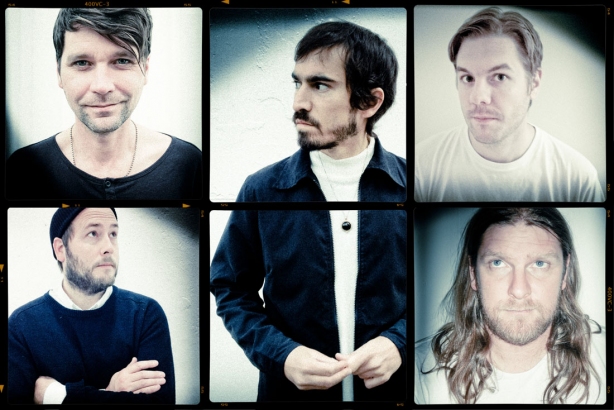 It did not take long for the release of the first vinyl single on Modesto Records, “Is anything ever done?,” which includes four beautiful, well-rounded songs, one of them being, “I can tell by her eyes” to come out.

At the end of this year, the British label Track and Field Organization (European home for bands such as THE CLIENTELE, THE BROKEN FAMILY BAND, HERMAN DÜNE, THE ESSEX GREEN, OF MONTREAL and THE LADYBUG TRANSISTOR among others and refuge to the greatest musical lovers of melodies from the 60’s) invited them for their first concert outside of their country, in London, as the opening act for one of the collective bands of psychedelic pop: THE GREAT LAKES.

“I can tell by her eyes”, which will later become part of their debut album, is their first hit amongst critics and fans, and this song quickly is put on rotation on the Swedish Public Radio.

They toured through Germany and recorded a session for the prestigious national radio program,  P3 POP, where bands such as EL PERRO DEL MAR, CARIBOU and JENS LEKMAN had performed, as well.

Various songs are put out on distinct compilations: “I can tell by her eyes” is released on “Sonically Speaking #10”, a CD which comes from the well-known Swedish musical magazine, Sonic Magazine (along with bands such as THE RAVEONETTES, ED HARCOURT, EVAN DANDO and NICK CAVE & THE BAD SEEDS), and “You set the terms” on “Mjuk i Mössan” a comp published this same year via the famous Swedish festival, Emmaboda, where bands such as COMET GAIN, THE RADIO DEPT., FLOTATION TOY WARNING, THE ESSEX GREEN, SLEATER-KINNEY and YEAH YEAH YEAHS performed.

They lavished through Swedish stages and also performed in festivals such as Pop Dakar (in Stockholm), Sommarfesten (in Hässleholm) and We & You (in Malmö) where they played with JOSÉ GONZALEZ, THE BEAR QUARTET and BALLBOY, just to name a few. The group also shared the stage with PLUXUS and with HEIKKI. This last festival proved to be fruitful in the upcoming years as HEIKKI is the band formed by the couple, Maria Ericsson (guitarist and singer of THE CONCRETES) and Jari Haapalainen (guitarist of THE BEAR QUARTET,and famed producer). They also shared the stage in Sweden with MATES OF STATE and RADIO DEPT.

All of this led up to the recording of their first album, under the production of Fredrik Norberg (ex-POPSICLE).

"I’m going to let my new swiss army knife answer to that" is released at the beginning of 2004 on the label Fickle Fame. Their first album demonstrates that they are a band with a perfect concept of melodies, which sound a bit like THE AISLERS SET or THE FAIRWAYS: jangle-pop with precious wind arrangements, played with freshness and emotion, as shown in songs like “You set the terms” with the incredible and addictive riff which reminds one of the sunshine pop from the sixties, “Leave.Now.” and the final crescendo which is evidence that a band can intelligently unite intensity and melody, the previous mentioned, “I can tell by her eyes” is an immediate pill popper with the unforgettable trumpet or the punk-pop flavor of  “He’s a rebel”.

Precisely, “He’s a rebel” is released on 7” as the hit single, with “What do you know now?” and “Talking about moving on” as the B sides of the single.

Kristian Rosengren (AEROSPACE, THE LEGENDS) praised them to the skies: “Sensibility, melodies and amazing instrumentation. They have everything and are in abundance”.

The prestigious record store, Rough Trade, remarked on their album debut: “Each song is a brilliant pop gem. If this album was published in the 80’s, 53rd and 3rd (label created by Stephen McRobbie of THE PASTELS and it’s where bands such as TALULAH GOSH, SHOP ASSISTANTS, BEAT HAPPENING, THE VASELINES and BMX BANDITS started out, just to name a few) would have put out this release.”

They performed in the festival Peace & Love (Borlänge) together with LAUREL MUSIC, JENS LEKMAN, MATTHIAS HELLBERG, NIKKI SUDDEN and LAST DAYS OF APRIL, among others.

Before the avalanche of events, changes in formation arrived quickly with Magnus Ludin leaving the band and Jesper Klein (bassist, pianist) and Sibille Attar (vocals) joining the group.

They set off on their conquest of Europe with a four week tour where they shared stages with SATURDAY LOOKS GOOD TO ME. To celebrate, they published a 7” also on Fickle Fame, on the masculine side (boyside) the North Americans, and on the feminine side (girlside) the Swedes, with one of their songs to be their own classic, “The state of harmony,” in a different version which will later be released on their second album. On this song, the band introduces string instruments for the first time.

“He’s a rebel” is put out on two compilations “Records make great pets” (of the British label Stereo Test Kit), along with other great Swedish bands such as CLUB 8, SAMBASSADEUR, BRITTA PERSSON or EL PERRO DEL MAR,  and “Songs we have learned to sing” (Velvet), with more illustrious Nordics such as PETER, BJÖRN AND JOHN.

The prestigious English webzine Tangents www.tangents.co.uk  makes a mix of songs with some of the best songs of the year called “He’s a rebel”, precisely including the song of the Swedish group.  Furthermore, important bands such as SURFJAN STEVENS, THE DECEMBERISTS, COMET GAIN, KICKER and PREFUSE 73 are also included.

The connection of Jari Haapalainen quickly takes effect. Filled to the top in producing (some of his work includes INTERNATIONAL NOISE CONSPIRACY, THE CONCRETES and ED HARCOURT) Haapalainen produced “Let’s get out of this country” for our beloved CAMERA OBSCURA, calling on Sibille and Isak to form part of the chorus with members of other Swedish groups such as THE CONCRETES, and participate in “If looks could kill” and “I need all the friends I can get”.