OVIFORMIA SCI was born when the 80s were just getting started, and with the 80s so many other things. The group was born as all kinds of groups were born at that time – spontaneously, with people getting together because they wanted to, because they were excited about living, because they were excited about being young! Excited about looking ahead at the future, and looking out, in any new direction, not toward our parents, not even toward our older brothers and sisters. We didn’t want them as guides, we didn’t want their ideas, and we definitely didn’t want their esthetic or their music. We wanted to create a new universe for ourselves, DIY-style with our own references and our own codes.  And that’s how we started bands, with the same innocence and frivolity (and sometimes with the same longevity), as we started a new relationship. “Do you know how to play any instruments?” was the de rigor question in the former situation, “Do you want to go out with me?” in the latter. Sometimes both things were combined, the teenage band and relationship. Bands were formed between boyfriends and girlfriends, brothers and sisters, cousins, friends, acquaintances, and even total strangers found in one of the few bars (now legendary) where the few colorful personalities of Madrid hung out then. Madrid was still late-Franco-era grey, or at best a dull brown with the “new air” of the transition. Both “groups” were hostile in the face of these strange, new people (immoral for one of them, hedonistic for the other) who asserted themselves by going out into the streets and copying (also DIY-style) the esthetic of their idols. The provocation was stimulating and the irreverence a defining trait of the young people who creating, without even realizing it, what would later be called the Movida Madrileña, which, now that time has created distance, doesn’t deserve to be dismissed they way it has been for its musical value (or lack thereof), though maybe it doesn’t deserve to be made legendary because of just that either. But it does deserve to be valued as a moment when young people had the power to create and express themselves limitlessly, thanks in part to a new generation of people who were working in the media and in the concert halls and who broadcast and spread the word about these bands. The “professional-commercial” limitations came later, but in the beginning groups were formed just like that, because why not, with the conviction that one could get up on stage and make music just because they wanted to. 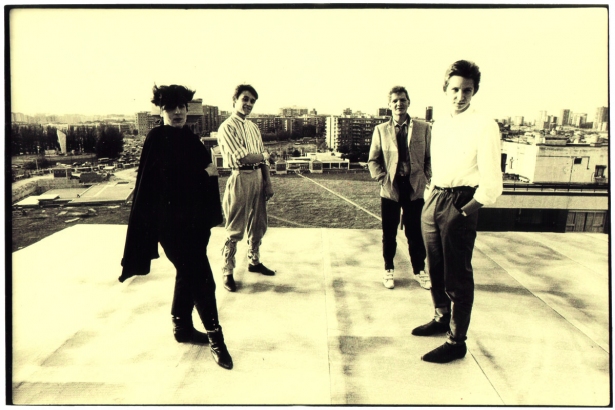 OVIFORMIA SCI got started this way too. Lucho, Clara, and Ger’s first musical incursion (Clara and Lucho were a couple; Ger is Lucho’s cousin) was in 1980 with a friend, Miguel Bañuelos, who had already worked with Manolo Campoamor. That group was called FALSOS FANTASMAS and it was a “summer love”, brief and intense, because by fall Miguel was already thinking about the idea of WAQ and the three of us were taking the first steps toward OVIFORMIA SCI. And it was all happening so fast! By the end of the year we had already decided our goal was to “debut” in the “1st Simposium Tecno”, and we conspired with our new BFFs, the AVIADOR DRO, in Servando Carballar’s apartment in the Prosperidad neighborhood. That was another of those “teenage” traits of the Movida bands – with so many eclectic sources and influences, in the end we wound up getting together with groups that had the same tastes as we did. We were all each other’s fans.  But in the end, it’s the same as people who don’t like taking walks in the mountains not normally becoming best friends with hiking fanatics; your friends are people you have things in common with, and who share your taste. We grew up on krautrock and the fathers of electronica, and we believed in the future and in technology, and we declared ourselves pro-European. We didn’t agree with other techno groups about everything, but we did about the fundamental stuff. And, we played with a drum machine instead of traditional drums!! It seems totally normal now, but back then it was an outrage to the audience; people threw all sorts of things at us. But I’m getting ahead of myself. Just thinking about our debut on March 9th, 1981 in the Sala Marquee, predecessor of the legendary Rock-Ola, was enough to change our lives. We threw ourselves 100% into rehearsals, working with the first synthesizers and sequencers on the market: those ancient Korgs that looked like old telephone switchboards. And we spent almost as much time working on our repertoire and the hellish programming as we did on figuring out our look and on-stage attitude. We left behind our studies, our class-mates, some thing or the other forbidden by an angry parent … even the 1981 coup d’état happened during a rehearsal and we ignored it until we finished rehearsing. We were even naïve enough to go out to buy a French fashion magazine that we liked at the time, Depeche Mode (what a coincidence, right?), to look for ideas for our own style that, at the time, seemed more important than Tejero and his “se sienten, ¡coño!” (Sit down, goddamnit!) during the inauguration of Calvo-Sotelo who, to make matters worse, was Clara’s uncle. (Another anecdote: another of Clara’s family members who was seated in the audience was hurt, though not seriously, by Tejero’s bullet which had bounced off the ceiling.) The coup was settled and everything was back to normal, and by the time we got to March 9th we had completely forgotten about those events and got up on stage at the Marquee to come out to society like debutantes. In the audience, as was normal, there were lots of other members of other groups (by which we mean “the” groups, because we were just word of mouth at that time and hadn’t proven ourselves yet), and the regular characters. LOS INICIADOS was the opening act, and AVIADOR was the closing band, and sandwiched in the middle were LA TERAPIA HUMANA, EL HUMANO MECANO, and us. We went out to play our repertoire: “Imágenes De Objetos Volando”, a budding “Teletipo”, and “Fotografía”. The songs and our appearance – dusty, dressed in plastic and metallic colors, wearing plastic tubes filled with colored liquids as necklaces, and bike reflectors stuck on our faces (low-income, DIY androids) – were the key to OVIFORMIA SCI and its influences. The mix was a hit and that night we earned the badge of “band”. (Another anecdote: while AVIADOR DRO were closing the show, the police raided the place under Vagrancy laws – homosexuals were still included in that group at the time – and they took everyone who looked strange down to the station, and Ger – who definitely looked “suspicious” with the style he had put together – was among those taken.)  A “rescue committee” was organized to go get him out of custody, formed by Lucho (who looked pretty much the same), one of the members of AVIADOR DRO with his anti-radiation suit still on, the manager of the concert hall who was wearing a tuxedo because of the concert hall category of what was really a bar, and Ger’s sisters. The mission was a success, but we still think it was more a credit to the sisters than the rest of the extravagant crew.

The day after the Simposium show, Madrid was talking about OVIFORMIA!! And we even got a letter from Fernando Márquez asking if he could join the band! El Zurdo, the author of the amazing “Para Ti” with PARAISO, put his new project, POP DECÓ, to work with OVIFORMIA. The rush was well-justified. Unfortunately, the thing with Fernando didn’t work out, but that’s where three teenagers – three teenagers from that slightly prissy middle class of that specific era – began to develop relationships with people who up to that point had basically been their idols: PEGAMOIDES, Ana Curra and Eduardo Benavente, Las Costus, Bonezzi, McNamara and Paloma Chamorro (among many others). Paloma, by the way,is responsible for the getting the fourth and fundamental member of the band, Paco Iriarte, her love-interest at the time. It wasn’t an instant fit, if we’re being honest, but Paloma was an insistent match-maker and in the end, she got us together. And it was a good match, because the chemistry was explosive and that’s when OVIFORMIA SCI became more than a group – it became a sort of life experiment. We shut ourselves up in Lucho’s apartment in Chamartín and began to go through the motions of the rest of the things in life as if it were just a formality. What was important was the time we spent in the apartment, looking for ideas not only from other groups, but also from movies, scientific magazines like OMNI, and also fashion magazines like Vogue and Donna. We invented new experiences for ourselves every day, we built songs “visually” in graphics, we chose images for a collage of photos clipped from magazines, and we chose sentences at random like the Dadaists… Out of these sessions – because they are more that than rehearsals – songs that express all of those influences were born; “Magazines”, “No Comments”, “Una Nota Di Bianco”… and older ones like “Teletipo” and “Hablamos De Nosotros” were reinvented.

Any album we got our hands on brought something new into our collective imagination and modified whatever we had done before. Nothing was unchangeable. So much so that, sometimes, we suspected that our audience would have preferred to be able to sing along with the chorus of a song instead of listening to its millionth variation… Maybe that (that, and being lost in our own world) is why we never recorded an album, and why, when 83 came around and the record labels were shaking off their lethargy and getting ready to make some money off of the Movida, maybe a group like OVIFORMIA didn’t really make sense. Or maybe we didn’t get the industry. Either way.The question is that we clearly weren’t a good fit. But seeing it now in retrospect, what always seemed like the group’s failure turns out to be a true success: we became a cult favorite. And without even dying! Clara Morán