Nick Garrie is born in Yorkshire, England, on June 22 to a Russian father and a Scottish mother. They soon move to Paris, where Garrie spends his childhood, and where he takes his first musical steps in his school choir.

He returns to England to study at the University of Warwick, where he satiates his passion for poetry and especially for surrealism, both of which form part of his introverted, acoustic music, as he himself stated: “Just the idea that you could turn words and their meaning around had great beauty and was very inspirational for my song writing”. While there, he meets some of the great minds of the moment, such as Greamine Greer, the prominent feminist and author of the book The Female Eunich. Despite this, he feels out of place and decides to leave the university in search of his own place. 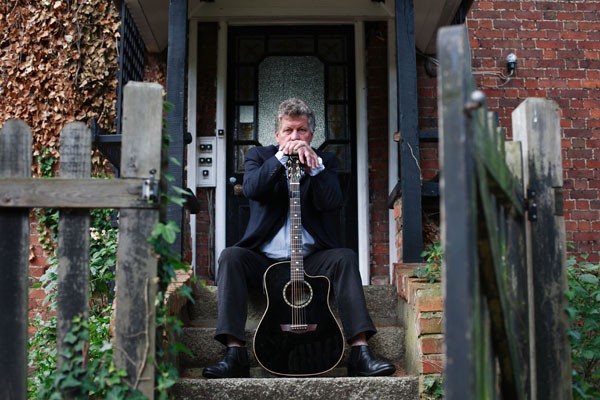 With a friend and violinist, he travels to the south of France where they begin playing in bars and restaurants and where they regularly sleep on the beach. Due to his double nationality (English and French), the French government enlists him for military service, which obligates them to flee to Italy. There, destiny steps in and, within days of landing in Italy, Nick is invited to play on Italian television.

As the date is for two months later, they decide to fly to Amsterdam in the meantime. There they begin to play important concerts, including one in the mythical Paradise, the night alter PINK FLOYD had played there. They begin to earn money from these concerts, and to feel pulled to the hippy movement, which keep them in Amsterdam five more weeks. Upon their return to Italy to play on the television program they stop in Portofino, where they spend the majority of the money they had earned in Amsterdam on a single night in a luxury hotel. And to make things worse, the performance was cancelled due to union strikes, and neither their agreed upon earnings nor the travel costs were reimbursed.

In urgent need of money, they return to St. Tropez. They cross the border in a van, hidden under blankets. There, they slowly developed a fan base until one of the fans proposed a trip to Belgium (a safer place for them at the time) in order to record a small selection of Nick’s songs in a small studio the fan had. From that session, there are acoustic recordings of songs that would later appear on his debut album, such as “Beeper Tones of Blue” and “Bungle Tours”, as well as other songs that would remain unreleased, like “Silk and Stone” and “Cambridge Town” (which has recently been released by Rev-Ola). Nick himself didn’t even listen to the songs again until just a few years ago, while working on the Rev-Ola release.

After this experience, he decided to return to the university in the fall and finish his studies.

The French record label DiscAZ (also home to artists such as Brigitte Bardot and Michael Polnareff) contacts Nick Garrie to organize a meeting. The Englishman’s songs had gotten to the company thanks to a friend of Nick’s mother who worked for the record label as a lawyer. Listening to “Deeper Tones of Blue” was enough and they closed the deal. He would work with the producer Eddie Vartan (Sylvie Vartan’s brother, and an important symbol of the French rock scene), who would record the songs that made up his debut album, "The Nightmare of J.B. Stanislas", with the help of a 56 musician orchestra (some of whom where regulars on Johnny Hallyday’s tours) in the Davou studios. Garrie, a lover of initial acoustic intimacy of his compositions, distanced himself from Vartan’s results: “When I went into the Studio I could hardly recognize any of the songs. Eddie was absolutely charming to work with, but the album pretty much broke my heart and I never kept any copies and only really found out about it when I started teaching a couple of years ago and looked it up on the net for a laugh. I got a big shock because Stanislas is all over the place but the other albums I made hardly get a mention”. Vartan was looking for the pompous beauty of the big musicians of the time like Nilsson and Garrie got lost in the midst of all the production. Only the last song, “Evening”, is recorded the way Garrie wanted, due to the impossibility of finding another option with Vartan. Garrie could choose to work with any musicians he wanted and he decided to record the disc’s final song with only the trumpet player Ronnie Buttacavoli.

The result is a tremendously beautiful album, that goes from the most dazzling surrealism directly to straight emotion. Citing the specialized psychedelic fanzine Sweet Floral Albion: “What you get are delicate, seductive pop vigentes akin to Peter Daltrey's softer moments; melancholic, singer-songwriter witfullness with lashing of strings. A quiet, understated and under-heard treasure trove”.

Before releasing the album the first single, “Queen of Spades,” is released, produced by Mickey Baker, one of the driving forces of rock n’ roll in the 50s. The title track was dark and dreamy, while the B side, “Close Your Eyes” shows the sweetness of some of his melodies. Soon after, Nick speaks out against the side A single, saying that “it’s horrible” and that he won’t play it live anymore.

Finally, “The Nightmare of J.B. Stanislas” is released in 1970, but the suicide of Lucien Morisse, head of DiscAZ and principal promoter for the project, leaves the album without much support and without a promotional plan, resulting in its scarce sales. So scarce, in fact, that, over time, the disc becomes a collector’s piece, reaching a price of 1,200 €, with Billboard calling the album “one of the strangest psychedelic pop albums from the late 60s”. Even his family and friends knew nothing about the album until many years later.

Disappointed, Nick leaves the music world and decides to finish university. Afterwards he works in diverse jobs: a balloon factory, as a French teacher, a semiprofessional ruby placer… until he finally starts a ski business in which he works as an instructor where, over the course of the 25 years that he has worked there, he has clients such as Paul McCartney and his wife, with whom, as you can imagine, he maintains interesting and passionate conversations about music.

Garrie doesn’t stop writing music, and on one of his many travels he meets the renowned composer Francis Lai (who won an Oscar for “Love Story”, and wrote the scores for, among other movies, “A Man and A Woman,” “Live for Life,” “Bilitis,” “Dark Eyes” and “Emmanuelle”). Lai suggests signing with his label to record a single, but on the condition that he change his artistic name. Lai proposes that Nick call himself Nick Martin, but in the end he uses his mother’s maiden name, recording as Nick Hamilton, and makes the single “Un Instant de Vie” with Lai. This would be the first of many collaborations between the composers, though in this specific occasion, Nick Garrie left soon after to start his business in the Swiss mountains, in the small town of Chateau D'Oex.

1984
The opportunity to record a new album finally arrives. With the production of Paul Samwell-Smith (THE YARDBIRDS original bassist and also Cat Stevens’ producer) and two more of Stevens’ regular musicians, Alun Davies and Gerry Conway. “Suitcase Man”, with a folky, acoustic sound, Nick Hamilton returns to his original name. From this disc come the two singles: “Smile” and “Back to 1930”, the single to thank for the greatest reach of the disc (in a time when singer-songwriters were considered out of style), and which reached number one in sales in Spain, which helped him land an appearance on Angel Casas’ show as well as go on tour in Spain that same year, with Leonard Cohen. Constantly nourishing his legend, the singer-songwriter gave Garrie compliments and a few pearls of wisdom: "That's a nice song I wish I'd written it myself" about one of the songs on his last disc, as well as a comment about the relationship between the artist and his public, after a bad concert in Bilbao: “You depend on the audience, and you're only ever as good as the audience is. Because they send out electricity, and then you feed off that”. In any case, the modest reaction to his second work causes Garrie-Hamilton to flee again.

Inspiration returns to Nick’s life, and he decides to record his third album (second under the name Nick Hamilton), this time only with the collaboration of producer and musician Peter-John Vettese, as well as the marvelous contribution of Francis Lai, with whom he co-wrote “Love in My Eyes” and “Smile”. Despite suffering scarce promotional support again, Garrie goes on tour in Japan and Korea with Francis Lai and his orchestra, where he masterfully plays and sings “Love in My Eyes”, “Smile”, “Il y Avait”, “Un Hombre y Una Mujer “…, receiving notable elegies. A long, intense and successful 46 date tour.

His foot is still not far enough in the door to continue working in the music industry.

Phil Smee (photographer and album cover designer from the 70s for such albums as “Opel” by Syd Barret, “Little games” by THE YARDBIRDS and “Freak Street” by JOINT, and also responsible for diverse compilations of psychedelic and garage music from that decade) releases two psychedelic pop compilations called “Circus Days”, which are well and widely received by the public. On these albums, Smee includes “Wheel of Fortune”, from “The Nightmare of J.B. Stanislas” which definitively confirms the album’s place as a cult collector’s item.

Garrie, still distanced from the constant turmoil of his first album, finds a group of Portuguese guitarists while traveling in Lisbon, and is impressed with the way they play; so much so that he decides to record “Twelve Old Songs” with them (the title being a response to Leonard Cohen’s “Ten New Songs”, which was released that year). The album was a revision of some of his oldest songs (above all from Stanislas) as he had originally wanted them to be: naked and free of trappings. His rereading of “Deeper Tones of Blue” shows how much these songs maintain their essence in this more primitive structure.