Till their last gig, during Purple Weekend Festival in 1998 (an event organized by themselves) LOS FLECHAZOS waved the flag of teenage pop for more than a decade, timeless melodies and elegance, and a prove of that was their considerable amount of fierce fans, with which they kept a very strong, close relationship, and their acknowledgement in countless international sixties meetings. But they weren’t just a revival band: like DODGY, SUPERGRASS, LILYS or even OASIS, LOS FLECHAZOS evoked both the sound and aesthetics of pop’s golden age, bringing them a renewed sensibility. 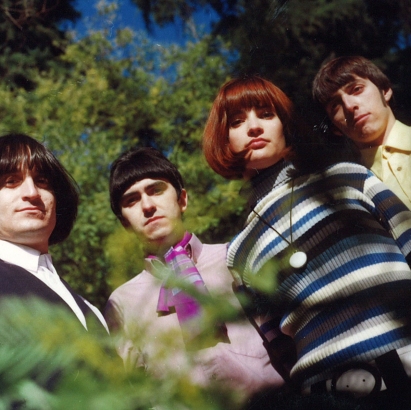 They were the main mod-beat band in Spain, since they gave their first show back in 1986 in León, their hometown. Through all these years they were under different line-up changes, always led by Alex Díez (guitar and vocals) and Elena Iglesias (Hammond organ).

The complete story of the band is too long as to be told here, so we will just say that they released six LP´s. The last two appeared in Elefant Records, and were also released in Japan. They toured many times around Spain, with morethan sixty TV appearances. In all this time they also did video-clips, recording sessions in England, concerts in festivals, and tours in Italy, Germany, France, Switzerland and the UK.

We could describe their music as 60’s pop, a mixture between the mid-sixties, Shel Talmy produced bands (WHO, EASYBEATS, CREATION, KINKS...) and American blue-eyed soul sound (MC COYS, MAUDS, YOUNG RASCALS, STANDELLS...). The fact of singing in Spanish helped them to become so popular in Spain, and the two singles released on British label Detour Records, sung in English and with very good feedback, as well as the live CD released on German label Fourtune Records, managed to achieve them almost the same in Europe.

In Elefant Records we are truly proud of being part of their history. Their pop artefacts will always have a place in our hearts, and in all timeless pop lovers.