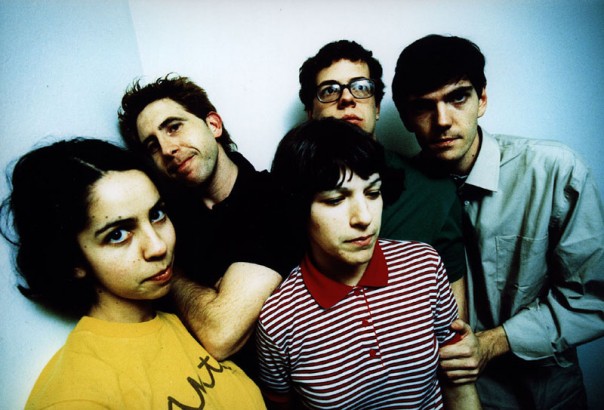 The band started in the middle of 1997 approximately, when Nacho and Jaime were already playing in another band. Nacho started to pass Jaime some tapes with songs he had composed and didn´t fit very well in the band they were with at that moment, as those songs were much softer, with very little distortion, more pop oriented.

Jaime changed the drums for a bass and started working with a drum machine. To complete the line up, they looked for a girl to sing a little and play some other instrument. And then Laura came in to play keyboards and sing backing vocals..

Their first rehearsals, and the recording of their first demo, took place in Nacho´s bedroom as it was not neccesary to play too loud. The demo “lapequeñasuiza canta en español” was recorded on Christmas of 1997. Short after that Fernando came to join the band, and the new line-up recorded a second demo: ”de vacaciones con lapequeñasuiza”-. It was again 4-track recorded, and using a beatbox.

As a foursome they played their first gig in Maravillas Club (Madrid) on October 1998.

In February they play in Siroco (Madrid) again with VACACIONES. Shortly afterwards, their first single, named like their first demo -”Canta En Español”- was ready. Then came some gigs: one in Murcia with NIZA, METEOSAT and MUSIDORA, plus an Elefant party in Barcelona in April, with VACACIONES and CECILIA ANN; they also played some acoustic tracks for Julio Ruiz radio Show in RNE 3. Meanwhile, the single started to sell quite well in Japan.

Then they realised they needed another member, and they found Marina in a very special way: during the party held by “Viaje A Los Sueños Polares” radio show in Madrid in April, they give away flyers among the audience, asking for a guitarist, and Marina answers; not only she turns out to have excellent guitar skills, but she’s also a big fan of the band and a member of Elefant singles club!!! They play their first gig with this new line-up at a party held up by Radio Jabato. On the 22nd May they play with ME ENVENENO DE AZULES and GASCA, on another Elefant party in Madrid, at Maravillas club.

In February 2000 they release a cdsingle/ten inch vinyl with five songs recorded in Madrid Rock Soul Studios, featuring the vocals of Laura and Nacho. Ten inch includes as a bonus track the song that had previously appeared in our “Verano del 99” compilation: “Viviendo en los 90”, which by the way is one of their most popular songs.

They supported MARINE RESEARCH and VACACIONES in an Elefant party the 20th November in Madrid. They have also recorded a 30 minute live show for Spanish tv; they open for German outfit STEREOTOTAL (from Bungalow Records) in two shows in Madrid and Barcelona in March 2000.

After the release of “Simpático” Laura leaves the band, and a new keyboard player called Luis comes in.

In 2001 American label Shellife releases a compilation called “Picnic basket”, including a song by LA PEQUEÑA SUIZA. Other bands in the comp: PO!, IMPOSSIBLE TYMES, POSTAL BLUE or THE MAYBELLINES.

Shortly after the band splits.