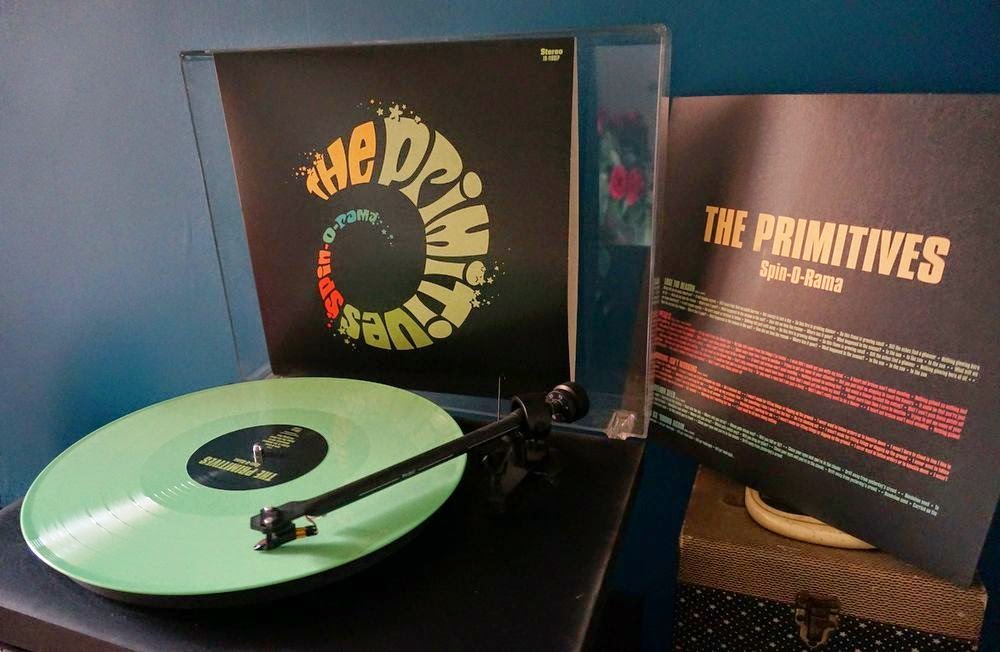 I was bemoaning recently there hasn’t been any great albums released this year; a remark which prompted a host of suggestions that I duly ploughed through. There were some good songs here and there but very few albums which kept my attention for the duration. Of those that did, I’ve not feel suitably inspired to listen again. Much was far too earnest and not a lot of fun. I thought I was becoming easier to please; maybe not. Maybe I’m more of an old stuck in the mud fuddy-duddy than I care to admit.

And then, as if by magic, the shopkeeper appeared with the new long-player from the Primitives. Spin-O-Rama is half an hour of glorious pop classism: the intoxicating blend of old and new; of familiarity and discovery. Why reinvent the wheel when it all it needs is a shiny polish? It’s a record packed with tightly constructed songs by a band still enamoured with 60s girl groups, the Velvet Underground, the Ramones, Blondie and eyes-blinking-in-the-morning-sun psychedelia. It was a heady mix when they made their classic Lovely in 1988 and it’s a combination which remains irresistible. Everything one loved in that LP is present and correct here. It’s the fifth Primitives album but feels like the true successor to their sparkling debut. They know pop music boils down to having a couple of verses, a chorus and/or a hook. There’s no need to dress it up too much, to make it more complicated. Sure, embellish the basic guitar, bass and drums a little but keep things short and sweet (or sometimes sour).

That isn’t to say, by any means, the Primitives are either lacking in imagination or are attempting to regurgitate their past, even if they echo it. There’s so much crammed into this one record - it whizzes past at such a lick (eleven songs in 28 minutes) it’s difficult take all in at once - it begs, and gets, repeated plays. Whether Tracy Tracy is crooking her little finger at the listener or Paul Court takes off on a giddying space flight the effect is close to bliss. The title track introduces itself like a distant cousin of “Crash” with a similar finger picking guitar motif; “Hidden In The Shadows” romps after it with simple rhymes and pounding rhythms; “Lose The Reason” is a big rolling and tumbling duet; and the ludicrously intoxicating rush of “Petals” surely has to be released as a single so I can set the video recorder to tape them playing it on Top of The Pops. “Working Isn’t Working” - with a hint of the Monkees’ “Look Out (Here Comes Tomorrow)” - has Paul singing “I just want to sit doing nothing”. That Paul took 23 years since the last album of original Primitives songs to make this I’ll take him at his word. It’s a fab track, thank heavens he finally rustled up the enthusiasm and knuckled down to get it together.

That enthusiasm pours from the grooves. Spin-O-Rama is the sound of a band enjoying what they do, with little to prove, free from expectations, free from record company pressure. For all their perceived perkiness they've had their prickly moments (and aren't half as cheery as one might think). Lest we forget after the Prims brush with fame their first single from album number two, Pure, had them stroppily protesting they were “Sick Of It”. Even though Pure (1989) and Galore (1991) were good much of their exuberant spirit dissolved and only fully returned in 2012 with the joyful covers "comeback album" Echoes and Rhymes. They’ve come full circle, Spin-O-Rama, if you will. Back to their beginning, back to the spirit of those early independent singles – “Really Stupid”, “Stop Killing Me” etc - and it suits them perfectly.   Anyone who has ever cared for the Primitives will love this LP, and anyone coming to the band from scratch should start here. Either way, it could be the most enjoyable new music you hear this year.